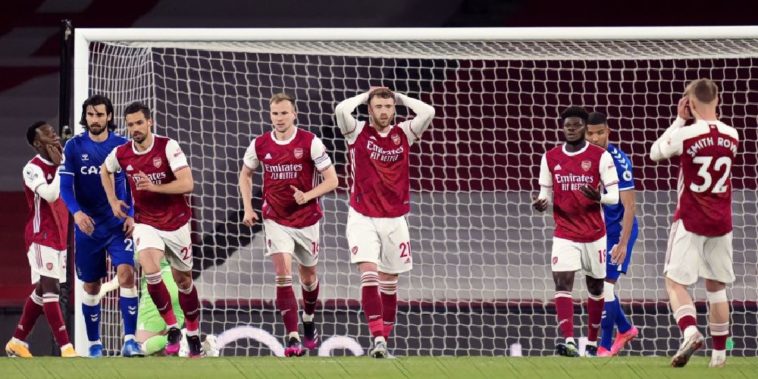 Arsenal’s inconsistent season continued as a Bernd Leno mistake condemned his side to a 1-0 defeat against Everton.

It was a game that would be played out between two sides whose European hopes had appeared to have dwindled in recent weeks, and it would turn out to be a particularly uninspiring first half at the Emirates.

The second half wouldn’t be much better, though Arsenal would be awarded a penalty by referee Jon Moss shortly after the restart following an apparent foul on Dani Ceballos. However, the decision would be overturned by VAR following a marginal offside by Nicolas Pepe in the buildup, though the initial decision to award a spot kick looked to be particularly soft.

It was a truly boring game throughout, though Everton would take the lead through a shocking piece of goalkeeping from Bernd Leno. Richarlison kept himself onside, before beating auxiliary left-back Granit Xhaka down the flank, squaring the ball across the box only for Leno to make a complete mess of things to inexplicably allow it between his legs and divert into his own net.

Jordan Pickford would be forced into a smart save to deny Gabriel Martinelli during second-half stoppage time to ensure that Everton moved to within three points of the top four places the win taking their points tally three points beyond their entire total for the 2019/20 campaign with six games still to play.

The victory was also the first that the Toffees have ever tasted victory at the Emirates, their last win away against the Gunners coming at Highbury back in 1996.

❌ Arsenal have lost 13 matches in the Premier League this season, not since 1994-95 (17) have they been defeated more times in a single league campaign #ARSEVE pic.twitter.com/swkbJXj1u1

Speaking after the game, Mikel Arteta felt Arsenal had the better of the encounter between his two former sides, and he wasn’t happy with the decision to pull the action back for offside having being handed their second-half spot-kick.

“We were the better team but there are certain decisions that we can’t control,” Areta told Sky Sports.

“To disallow a penalty 15 seconds before – [we had] eight or nine touches [after Nicolas Pepe was offside] – I saw it 10 times and I don’t get it. It can be taken the way they want. Zero control. Somebody has to explain that.

“We were the better team. We lacked some clear-cut chances and the edge in the final third. They are very well organised but we conceded the goal in the wrong moment and when we had the penalty but it wasn’t given.”

Asked about Leno’s own goal, however, Arteta said: “It’s an own goal and we know we have to do better.”

The result means Arsenal have won just six of their 17 home games in the Premier League this seaon, and asked about their record at the Emirates, the Spaniard simply said: “It’s terrible, unacceptable.”

Next up for Arsenal is their Europa League semi-final meeting against former manager, Unai Emery, and his Villarreal side on Thursday evening.