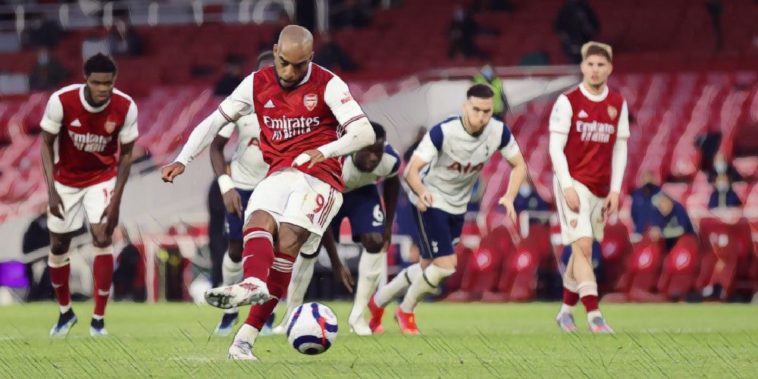 It’s the North London derby this weekend as Arsenal take on Tottenham Hotspur at the Emirates Stadium.

Here’s all you need to know about Sunday’s encounter.

After falling to three dismal defeats in their opening three Premier League games, the Gunners have managed to stem the tide in recent weeks with back-to-back league victories, albeit in less than convincing fashion.

Having edged past Norwich at home two weeks ago, Mikel Arteta’s men then produced a battling display to clinch another narrow 1-0 win away at Burnley, with Martin Odegaard’s stunning first-half free-kick proving the difference against what is a notoriously difficult opposition on their own turf.

Despite not quite being at their best, the visitors managed to hang on for the win courtesy of a stubborn defensive display, with the return of the previously injured Gabriel seemingly making all the difference, as too has the introduction of summer signing Aaron Ramsdale.

The former Sheffield United man’s arrival was met with little fanfare from Gunners supporters, yet he could well prove to be an astute acquisition, while fellow summer arrival Takehiro Tomiyasu has also earned plaudits for his early showings in an Arsenal shirt.

Both men were rested as the north London club secured a third successive win in all competitions against AFC Wimbledon on Wednesday evening, goals from Alexandre Lacazette, Emile Smith Rowe and an excellent flick from Eddie Nketiah clinching a 3-0 win over the League One side.

As for this weekend, Arteta could well have a fully fit squad to choose from with no notable injury concerns. Full-back Kieran Tierney was withdrawn with cramp in the win at Turf Moor but is expected to be fit for the north London derby.

While Arsenal appear to be finding form, Spurs‘ strong opening to the season has seemingly deserted them, suffering back-to-back 3-0 league defeats after their initial three wins on the bounce in the opening three games.

After slipping up against Crystal Palace, albeit after Japhet Tanganga’s red card, Nuno Espirito Santo’s side were then held by Rennes in their maiden Europa Conference League clash, before enduring a bruising defeat at home to rivals Chelsea on Sunday.

The north London side had made a bright start against Thomas Tuchel’s men and looked to have disrupted the Blues usually calm backline, although their failure to capitalise on that strong first-half showing came back to bite them as they were simply ripped apart after the interval.

Two goals in quick succession from Thiago Silva and substitute N’Golo Kante all-but secured the win just after the break, before Antonio Rudiger added a late third to rub further salt into the wounds, with Tottenham talisman Harry Kane coming under fire for putting in another limp display.

The England captain did, however, find himself on the scoresheet in midweek as his side raced into a two-goal lead against Santo’s former club Wolves in the Carabao Cup, although having squandered that advantage, Spurs were then left relying on the lottery of a penalty shootout to secure passage to the next round – where they face a trip to Burnley.

As for this weekend, Steven Bergwijn and his fellow forward Lucas Moura both remain doubts through injury, although Tanganga is available to return from suspension after missing Sunday’s defeat.

The two sides did meet in pre-season as part of the ‘Mind Series’ with Tottenham earning a 1-0 victory, although their last competitive encounter saw Arsenal run out winners in the Premier League.

Then under the stewardship of Jose Mourinho, Spurs took the lead midway through the first-half through the now-departed Erik Lamela, the Argentine firing a stunning Rabona into the bottom corner.

That lead lasted just over 10 minutes, however, as Martin Odegaard slotted home an equaliser, before the Gunners then completed their comeback on 64 minutes after Davinson Sanchez’s rash foul on Alexandre Lacazette allowed the Frenchman to fire home from the resulting penalty.

The visitors’ misery was then compounded with less than 15 minutes to play as Lamela went from hero to villain after picking up a second yellow card for needlessly lashing out at Kieran Tierney.

What channel is the north London derby on?

UK and Irish readers can watch or stream the match on Sky Sports Premier League.