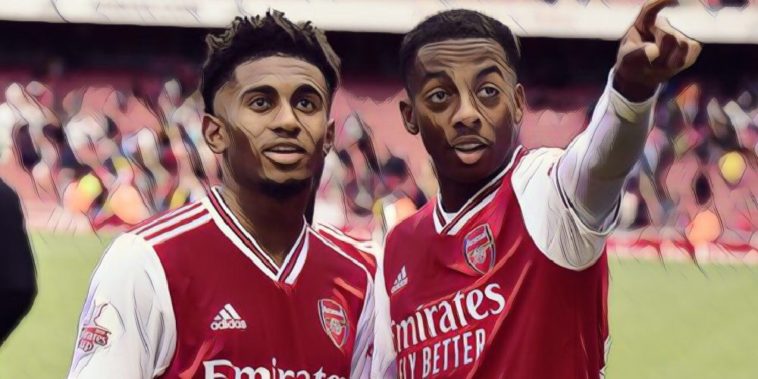 Mesut Ozil has urged Arsenal’s emerging young talent to believe in themselves as they bid to establish themselves at the Emirates.

Highly-rated youngsters Joe Willock and Reiss Nelson have started both of Arsenal‘s opening fixtures this season, the duo impressing as Unai Emery’s side secured back-to-back wins over Newcastle and Burnley.

Nelson has returned to Arsenal this summer following the 19-year-old’s largely successful loan spell with Hoffenheim last season, whilst 20-year-old Willock has shone at the heart of Emery’s midfield.

Nelson and Willock will be hoping to retain their places for Saturday’s top of the table clash with Liverpool, and Ozil has urged the pair to believe in themselves and enjoy playing for the club.

“I just want to say that the most important thing is to believe in yourself,” Ozil told Arsenal Player.

“Of course you have some days when it doesn’t go so well, but you have to believe in yourself, keep working and the most important thing is to have fun.

“If you don’t have fun, if you are losing and you make mistakes you will be disappointed. But don’t listen to anyone, you know how good you are, believe in yourself and have fun.”

Ozil’s advice comes after reflecting on his breakthrough as a young player at German club Schalke. The 30-year-old admits the step up to first-team football can be daunting, but says the advice of experienced teammates helped him believe in his ability to succeed.

“I was nervous (when I entered the first-team dressing room at Schalke), but also excited because it was the first time I spent time with the players,” he said.

“I was very, very quiet. I didn’t speak a lot in the dressing room, I was just looking to the left and the right and couldn’t believe I was here now playing with them. It was a great moment for me.

“I was just looking and thinking, ‘Oh my God, now I am here! Now I have to show my quality’.

“It was easier for me to show my potential on the pitch because they all helped me a lot. They stood behind me, so I was able to just enjoy playing football.”

Ozil added: “I was always giving everything to play in training, and after that if I’m not in the squad, or didn’t play those players always came to me and showed their respect.

“They spoke to me and told me I have a lot of quality, be calm, believe in yourself and your time will come.”