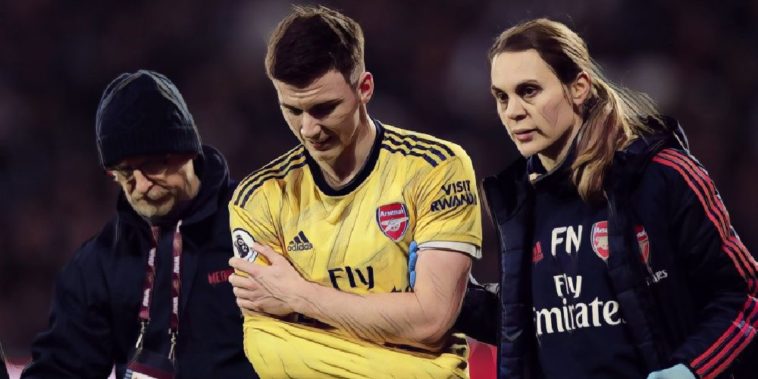 Arsenal have been dealt a major injury blow with the news that Kieran Tierney will miss the next three months after dislocating his shoulder in the win at West Ham on Monday night.

Tierney was forced off during the first half of the victory at the London Stadium following a challenge with Michail Antonio, with the club now confirming the full-back requires surgery and will spend an extended period on the sidelines.

The Scotland international has endured an injury-interrupted start to his Arsenal career since joining in a £25m deal from Celtic last summer, his start to life at the Emirates initially delayed as he recovered from a double hernia operation.

The 22-year-old has made just 11 appearances in all competitions for Freddie Ljungberg‘s side so far this season, and the Evening Standard are reporting he is now likely to be out until March of next year.

Sead Kolasinac will likely deputise for Tierney for tonight’s Europa League clash with Standard Liege, though Hector Bellerin and Granit Xhaka will miss the trip to Belgium with hamstring and concussion injuries respectively.

Arsenal are all but mathematically assured of their place in the knock-out stages, however, the Gunners can seal qualification as group winners with victory this evening.