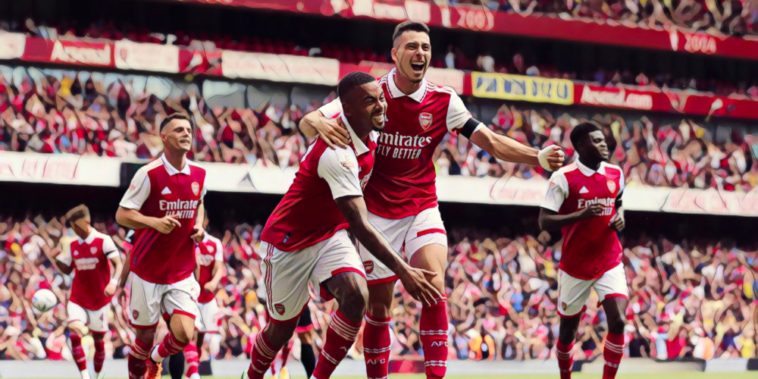 Arsenal are aiming to make it back-to-back wins to start the Premier League season this weekend, as the Gunners take on Leicester at the Emirates Stadium.

Mikel Arteta’s side impressed to beat Crystal Palace 2-0 on the opening weekend, while Brendan Rodgers will be looking for defensive improvement from his side after Leicester squandered a two-goal lead to draw with Brentford.

Here’s all you need to know about this weekend’s clash in north London.

Arsenal’s opening assignment at Crystal Palace was deemed a real test for an inexperienced side, but it was one that the Gunners passed with minimal fuss.

William Saliba was outstanding on his Premier League debut for the north Londoners, while both Oleksandr Zinchenko and Gabriel Jesus shone on their first appearances for the club.

🫧 Cleaning up at the back 🧹 pic.twitter.com/y36RnKywiE

After a disastrous defeat in another away London derby to start last season, this was a much-improved performance from Arsenal as Gabriel Martinelli’s opener and a Marc Guehi own goal secured all three points.

Arsenal’s first home game of the season with Leicester is followed by clashes against promoted sides Bournemouth and Fulham. After an opening win, the foundation is there to start the season strong in the club’s pursuit of a Champions League return.

Brendan Rodgers will have been delighted with his side’s performance in the opening exchanges against Brentford last weekend, as Leicester dominated the game and built a two-goal advantage.

Despite failing to make a signing so far this summer, a familiar Foxes side were in fine fettle as goals from Timothy Castagne and a Kiernan Dewsbury-Hall stunner put the hosts in control.

@KDH lays down a marker ⚽ 🚀 pic.twitter.com/bzEyAQxLqd

However, familiar flaws also crept in during the second half and Rodgers’ side were stung by a Bees fightback. Ivan Toney pulled a goal back, before Josh Dasilva’s late goal rescued a point for the visitors.

Rodgers will be hoping for an improvement on a dismal away record last season, one that saw Leicester keep just one clean sheet and register only four wins on the road in 2021/22.

Arsenal moved back into the Premier League’s top four with a 2-0 win over Leicester in March, securing a comfortable home win to boost their Champions League hopes.

Leicester were unable to get back into the contest after being undone at set-pieces once again, with Partey’s header the 15th set-piece goal the Foxes had conceded in the campaign to date – excluding penalties.

The Foxes ended the campaign having shipped 19 goals from set-pieces, the joint-most in the Premier League alongside Everton and Leeds.

What channel is Arsenal v Leicester on?

Arsenal v Leicester will not be broadcast live to a UK or Irish audience.