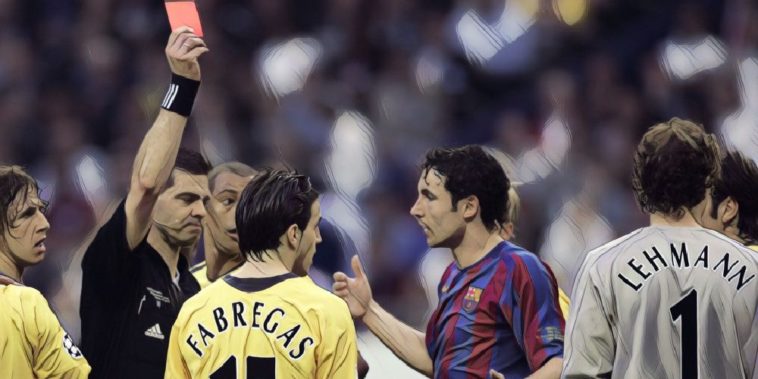 Jens Lehmann admits the pain of his Champions League final red card for Arsenal has not left him and says the incident is one he continues to ‘regret’.

Arsenal reached the final of the Champions League for the first time in their history in 2006, with the north London side facing Barcelona in the showpiece in Paris as they sought to become the first London club to be crowned champions of Europe.

What promised to be a historic evening soon soured as goalkeeper Lehmann became the first player in history to be sent off in a Champions League final after just 18 minutes, bringing down Samuel Eto’o just outside the box to hand Barcelona a numerical advantage.

Arsene Wenger’s 10 men took a shock lead before the break through Sol Campbell but were unable to hold out as goals from Eto’o and Juliano Belletti secured the trophy for the Spanish side, with Lehmann admitting the pain of the defeat has not eased with time more than a decade after his dismissal.

“No, [it doesn’t get easier with time],” Lehmann told the Arsenal ‘In Lockdown’ podcast. “You regret it more and more.

“It was in the spur of the moment and it just happened. It was probably down to the fact that we hadn’t conceded any goals and I just wanted to get going. I should have dropped off a little bit more but I didn’t know how fast [Samuel] Eto’o was. It was the first time I played against him.

“I was very sorry because Robert Pires was taken off. I went to sit in the stands and my sons came to me and we were very, very sad. We could have got a fantastic [result] at the end but Juliano Belletti scored. I met him a couple of years ago and he had good memories of me.

“It was very unfortunate circumstances but have you realised that after that red card, nobody else had been sent off in a final unless it was the 90th minute and the score was already clear and decided. During the major part of the game, nobody has been sent off.”