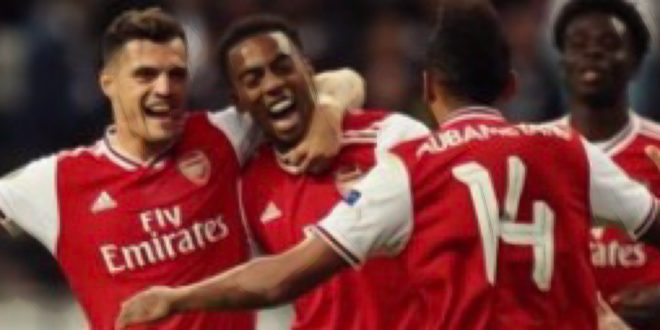 Arsenal began their Europa League campaign with a 3-0 win away to Bundesliga side Eintracht Frankfurt tonight.

After the shambles of their 2-2 draw with Watford at the weekend, a win in Germany was exactly what the doctor ordered for Unai Emery’s men – even if they were unconvincing for large parts.

Arsenal took the lead on 38 minutes through academy graduate Joe Willock’s deflected strike, with impressive 18-year-old Bukayo Saka and Pierre-Emerick Aubameyang striking late on to put some extra gloss on the scoreline.

Gunners boss Emery named a youthful side, with highly-rated midfielder Emile Smith-Rowe joining Willock and Saka in the starting XI, and the Spanish coach was full of praise for his young players after the game.

“Maybe with [Saka] his goal and performance he was taking confidence, he was finishing really strong,” Emery told BT Sport.

“Also with Emile [Smith-Rowe], after his injury. He played for the first time this season. [Joe] Willock started a little slow at the beginning but progressively he was feeling very better with a good performance.

“Torreira worked a lot, Xhaka played very seriously in that match. Everybody can be happy.”

“We know tonight that match was difficult. They were very strong here. They’re a very offensive team and defensively we needed to work, sometimes deep, sometimes with their full-backs very deep, crossing a lot to the strikers.

“We spoke and worked the transition, if we were organised defensively and with a good pressing against them.

“We did that. We had the possibility with the young players to create chances and help them, also sharing with experienced players. Their performance tonight was good. It’s our way.”