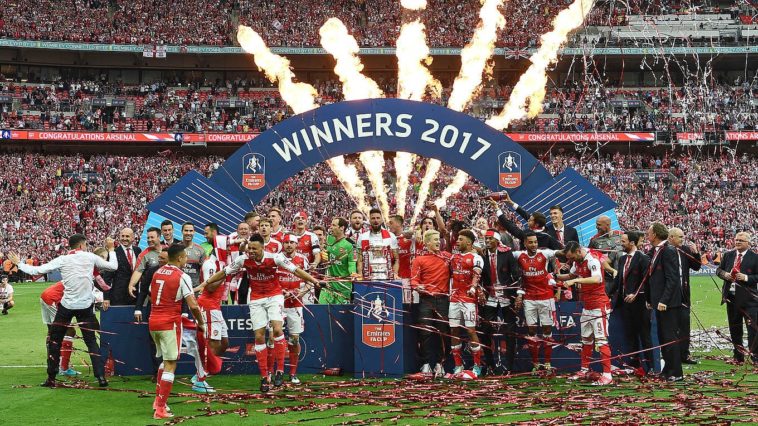 Arsene Wenger won his seventh FA Cup with Arsenal, the most by any manager, as the Gunners shoot down Chelsea’s chance at the double with a 2-1 victory at Wembley Stadium on Saturday.

Aaron Ramsey scored the crucial goal in the 79th minute. Substitute Olivier Giroud made his first contribution to the match when he crossed the ball to the head of the Welsh midfielder and past Thibaut Courtois.

Alexis Sanchez had caught Chelsea’s defence flat-footed in the fourth minute as he pushed the ball forward, with video replay showing that he allegedly used his hand. The play kept going as the Blues threw their arms up in protest, and the Chilean finished the goal past Courtois to open the scoring. Anthony Taylor allowed the goal to stand despite complaints, and Arsenal led 1-0.

The North London club could have run up the score even higher had it not been for a bit of misfortune and some Gary Cahill rescues. The Chelsea defender kept the score close with a goal-line clearance in the 16th minute after Mesut Özil’s shot hopped over Courtois. Cahill saved the day once more in the 30th minute, just stopping Danny Welbeck’s shot from crossing the line and into the net.

Chelsea’s frustration showed, and desperation was at an all-time high when Victor Moses dove in the box after dribbling past Alex Oxlade-Chamberlain. Moses was already booked earlier in the match, and earned his second yellow card with his pitiful attempt to earn a penalty for the Blues. Chelsea were left with ten players on the pitch after the 68th minute, and still hunting for a goal.

Diego Costa finally leveled the match in the 76th minute when he chested a pass down from Willian, outmuscled Rob Holding and half-volleyed the ball past David Ospina. Chelsea finally equalised, and fans finally let the air out of their chests after holding their breaths. However, the moment of ecstasy lasted only for a minute as Ramsey scored the game-winner, crashing down the Blues from their momentary high.

Arsenal have won six of their last seven cup finals, and their 13th FA Cup in the club’s history. Laurent Koscielny did not play because of his suspension for the red card from the final Premier League game of the season.

Here are some talking points about the match.

Chelsea sobered up from their celebrations for winning the Premier League, and looked to be a step too slow against a hungry Arsenal side. The Blues were slow to react to the first goal, or they were too focused on complaining before the whistle had blown.

Whenever Chelsea did have the ball, the Gunners pressed until they won it back, and the eventual losers seemed more than content with giving Arsenal time and space with the ball. The midfield was controlled by red shirts. Chelsea’s attack was stifled, who only had one shot on goal in the first half.

This match reminded me of Arsenal’s 3-0 over Chelsea back in September in the Premier League. Again, Chelsea were slow to react to things happening around them, and paid the price for it. Chelsea were still slow after already trailing since the fourth minute, and should have been trailing by more had it not been for Cahill’s clearances.

The Blues started to push higher up the pitch in their attack around the 30-minute mark, and Arsenal started to counterattack with the pace of Welbeck and Sanchez. Chelsea weren’t able to sniff out any danger, and Arsenal still had their shots on goal.

This was a frustrating show by Chelsea, who may have underestimated their London neighbours who played an untested defence of Nacho Monreal, Per Mertesacker, and Holding. The Blues laughed at the back-three, thinking it would probably be a cakewalk to a double-winning season, but it was Arsenal who had the last laugh.

Chelsea must have been salivating when Koscielny was suspended for this match while Gabriel was seen in a walking boot. 21-year old Rob Holding was called upon to play alongside Mertesacker who hadn’t started a match in 13 months. The front three of Pedro, Costa, and Hazard should have had a field day with that defence on paper.

Arsenal did not back down though. They smothered every Chelsea chance imaginable. Hazard’s shots were smothered by at least three red shirts. Sanchez ran down the pitch to win the ball from Moses and Kanté near the Arsenal corner flag.

There was a clear team effort from the Gunners to give Chelsea a difficult and limited amount of time in possession. When the Blues started to push further up the field, Arsenal gathered more players into defence and hardly allowed anything to get past them. Chelsea were forced to pass around the tight shape and hope for a prayer of a goal to happen miraculously.

The goal that Chelsea needed eventually happened when Diego Costa finally overpowered Holding and smashed one into the net, but it was not enough to get past Arsenal winning their 13th FA Cup.

Aaron Ramsey bossed the midfield with his partner-in-crime Granit Xhaka. The Welsh midfielder had a passing accuracy of 95 per cent. He scored the winning goal in the 76th minute, crushing the dreams of Chelsea fans at Wembley Stadium. He is a deserving man of the match for his contributions.