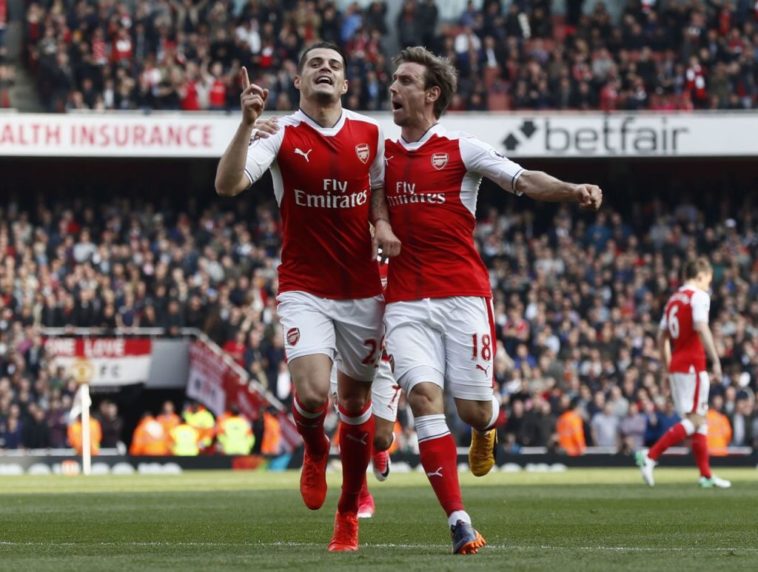 Arsenal comfortably ended Manchester United’s 25 game unbeaten run as the Gunners defeated them 2-0 at the Emirates.

The game also saw Arsene Wenger defeat Jose Mourinho for the first time in a Premier League game. With the win, Arsenal have come back into the hunt of finding a Champions League spot.

The first half was quite even as both teams found a few opportunities but failed to score.

The first shot on target came from Aaron Ramsey in the 9th minute when he found himself at the end of a very good through ball from Alexis. The Welshman forced a very good save from De Gea.

In the 31st minute, Oxlade-Chamberlain’s shot from just outside the box was deflected off Ander Herrera, forcing another save from De Gea.

The next minute saw Manchester United squander a huge chance to take the lead. A loose back pass from Rob Holding was intercepted by Wayne Rooney, who tried to slip the ball past Petr Cech. The Arsenal keeper did well to save the shot from Rooney who would have been better advised to square the ball to the awaiting Juan Mata. The first half ended with 0-0 and it looked like it could be anyone’s game in the second half.

Arsenal walked into the second half with a bit more ambition. They looked more threatening and eventually opened the scoring in the 54th minute. Granit Xhaka’s long range strike took a huge deflection off of the back of Ander Herrera, and the ball looped over David de Gea and into the net.

Before United could find a way to recover, Arsenal scored another goal in quick succession.

Former Manchester United striker Danny Welbeck found himself at the end of Oxlade-Chamberlain’s cross and the striker made no mistake as he headed it powerfully past De Gea.

Mourinho brought Lingard and Rashford on at the hour mark hoping to get something out of the game. But it didn’t quite work out as Arsenal were on the front foot by then.

Despite the presence of Xhaka on the field all this time, it still took 66 minutes for the game’s first booking and surprisingly, it wasn’t Granit Xhaka. Arsenal’s captain Laurent Koscielny got booked for a challenge on Martial.

Wayne Rooney had two long range attempts late in the game but both were off target. Arsenal brought Giroud and Bellerin on in the 84th minute but the game was already over by then.

Arsenal winning this leaves them 2 points behind 5th placed United with a game in hand and 7 points behind 3rd placed Liverpool with 2 games in hand. City sit in 4th place as this race for top 4 heats up.