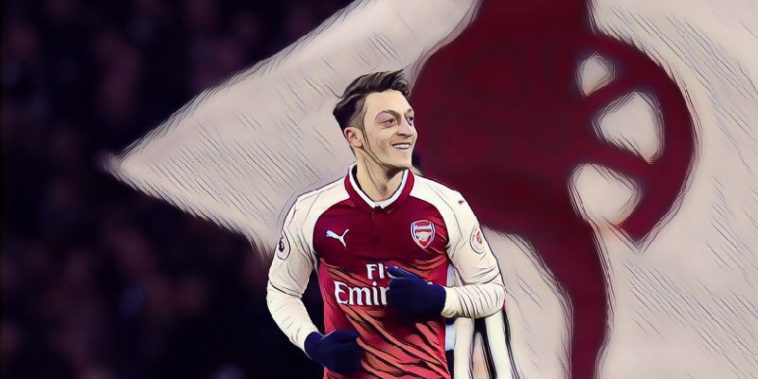 Mesut Ozil’s stunning volley fired Arsenal up to fourth in the Premier League in an unconvincing 1-0 victory over struggling Newcastle. Here are five things we learned from the lunchtime action at the Emirates.

Say what you want about Mesut Ozil – we’ve all heard it before now – but on his day, he is a joy to behold and it was his spectacular volley into the top corner that secured Arsenal their first league win in four outings.

With Newcastle defending resolutely, the game needed a moment of magic to open the floodgates and Ozil’s volley was just the tonic the game needed. The German read the situation superbly to anticipate where the ball would drop thereafter producing a spectacular finish. On an afternoon where most of Arsenal’s players were unconvincing and ineffective, Mesut Ozil’s contribution was telling.

6 – Mesut Ozil has been directly involved in six goals in his last five Premier League games at the Emirates (2 goals, 4 assists). Cracker.

Newcastle are now without a win in nine Premier League games (D1, L8), which is their longest winless run in league football since 2015. Benitez should surely be considered under pressure despite his sides resolute display.

The defeat – their fourth in a row – now sees Newcastle drop into the relegation zone. Whatever, the reason for Benitez’s sides drop, their form is really not being helped by the constant stories and rumours surrounding the clubs new takeover deal by PCP Partners said to be in the region of £300m. Magpies fans will want a resolution quickly.

After Newcastle seemed steady in the middle of the table a few weeks ago, they now find themselves in an early relegation dogfight. Despite Benitez’ impressive CV, the festive period will surely show how the club are willing to move forward as the winter transfer window looms. Will Benitez be backed in January, or will he stick around long enough to see the window open in the new year?

Another one of Newcastle’s problems is their lack of quality in front of goal. As the game drew to a close, the Geordies had a number of chances to grab an unexpected draw. Ayoze Perez failed to take to clear-cut opportunities when he put a shot and a header over the bar.

The forward position is one Benitez will be wanting to strengthen if it comes to it in January. Ayoze Perez, Dwight Gayle and Joselu have not lit up when needed. A bit of quality in those areas could do Benitez the world of good.

For a striker who has nine Premier League goals to his name in his first season in England at this stage of the season, Lacazette does seem to be substituted a fair amount of times.

His place was relinquished to Olivier Giroud against West Ham in the week, which came to no avail, much to his frustration. It seems as though Arsene Wenger does not have enough faith in Lacazette to lead this Arsenal team despite his impressive goals tally this season. As his number was shown to be replaced by Olivier Giroud, a chorus of boos rang around the whole stadium as a host of Arsenal fans were outraged as to why Lacazette wasn’t given a chance to add to his goals.

Yes, he missed a fair few chances especially his chipped effort which he should have done better with, but with Ozil and Sanchez around to supply him with the ammunition, the French will only get better from here on in.

Has Wilshere cemented his place in the Arsenal 11?

Despite Arsenal’s mishaps in front of goal against Newcastle, it was another impressive display from Jack Wilshere who was the main instigator for much of Arsenal’s play.

What is clear for Arsenal fans, is that when Wilshere is involved, Arsenal’s slick football steps up another notch and that was the case in some elements against Newcastle.

Wilshere put in another dominant performance in midfield like he did against West Ham in midweek. It was the first time he has started a second successive game since 2015.

With another key game against Liverpool coming up on Friday evening, and injury to Ramsey, Wilshere has a massive opportunity to reclaim his starting position in the Arsenal 11.