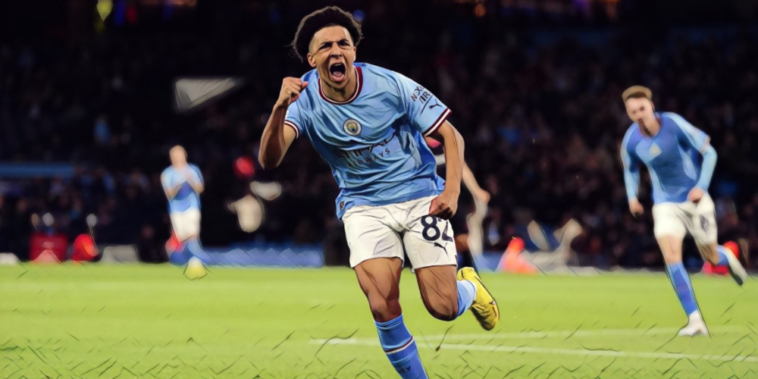 Rico Lewis made Champions League history this week after enjoying a dream debut at Manchester City, with the full-back marking his first start for the club with a goal against Sevilla.

The teenager also became just the fifth English player to start a Champions League fixture before their 18th birthday and we’ve decided to remember the quintet of precocious talents.

Jack Wilshere became the youngest Englishman to start a Champions League fixture at the time, when the midfielder was included in the Arsenal team for a 1-0 loss at Olympiacos in 2009.

Wilshere had earlier made his first appearance in the competition as a 16-year-old substitute, but was made to wait for a first start which came aged 17 years, 11 months and eight days.

The midfielder was billed as the brightest talent to have emerged from Arsenal’s academy for some time and starred following his initial introduction to the senior side. He won the PFA Young Player of the Year Award in 2010/11, a season which saw him produce a brilliant performance in a win against Barcelona at the Emirates.

Fitness problems plagued Wilshere however, and he failed to live up to his early promise as his body continually failed him. The 34-cap England international made 197 appearances for Arsenal, before spells at the likes of Bournemouth and West Ham.

He announced his retirement from the game earlier this year, aged just 30.

Josh McEachran was another who failed to build on his early potential, having been thrust into the limelight at Chelsea as a teenager.

McEachran featured as part of an inexperienced Chelsea line-up that had an average age of just 24, with the likes of Jeffrey Bruma (19), Gael Kakuta (19), Patrick van Aanholt (20) and Daniel Sturridge (21) given a chance to impress as the Blues came from behind to record a 2-1 win.

The midfielder made just 22 senior appearances for Chelsea, before embarking on a career spent in the Football League. Now 29, he has been with League One MK Dons since 2020.

Rico Lewis followed in the footsteps of Phil Foden this week, in emerging from Manchester City’s academy set-up to be handed a Champions League chance under Pep Guardiola.

Foden has been the jewel in the crown of City’s youth system and was handed his first start in Europe’s top club competition aged 17 years, six months and eight days. Foden’s first appearance was not one to remember as City lost 2-1 at Shakhtar Donetsk in 2017, but he has since had many memorable moments in the club’s colours.

The 22-year-old is already the owner of four Premier League winners’ medals, while he has been named as the PFA Young Player of the Year in each of the past two campaigns.

Jude Bellingham is a name on the radar of Europe’s biggest clubs, as the midfielder’s reputation continues to soar.

Bellingham turned down interest from English clubs to sign for Borussia Dortmund in 2020, with the Bundesliga side’s trust in young talent behind that decision. It is one that has been vindicated with Bellingham now established for club and country, having racked up more than a century of appearances for Dortmund.

The midfielder holds the record as the youngest Englishman to start a Champions League fixture, having made his full debut in the competition against Lazio aged just 17 years, three months and 21 days.

He has made 21 appearances in the Champions League to date, scoring six goals and providing a further five assists. This season he became just the third teenager to score in four consecutive Champions League games, after Kylian Mbappe and Erling Haaland. He is the first midfielder to have achieved the feat.

Rico Lewis had a dream debut to remember for Manchester City this week, as he marked his first start for the club with a goal against Sevilla.

The full-back was named in the starting side as City rotated against their Spanish opposition and received a standing ovation from the Etihad upon his late substitution.

His equaliser – lashed high into the roof of the net – saw Lewis eclipse Karim Benzema as the youngest-ever goalscorer on their first Champions League start and Guardiola believes there is ‘something special’ about the 17-year-old.

Youngest player ever in the #UCL to score on his first start 👊 pic.twitter.com/EV3zTyvwJi

“We see him every day, we don’t give out presents here,” Guardiola said following the win.

“Not just because he’s a Manchester City fan and from the academy, he has to earn it. But we’ve said since day one that this guy has something special.

“He’s aggressive enough defensively but does have a lot of margin to improve and with the ball when playing inside he is so good. And outside he showed today with his crossing and finishing.”