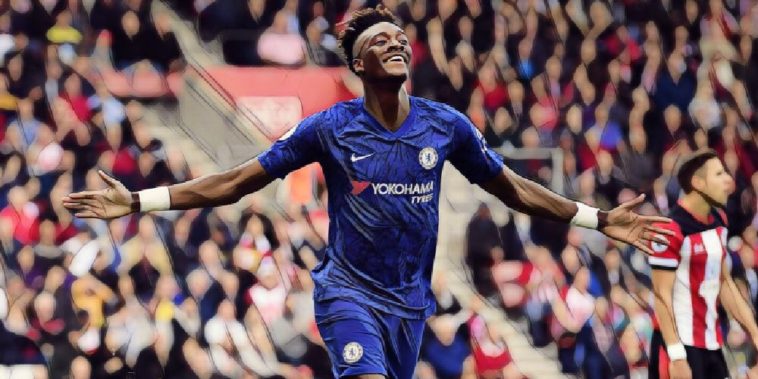 Tammy Abraham celebrated his call-up to the England squad with another goal as Chelsea thrashed Southampton 4-1 on Sunday.

Abraham opened the scoring with a fine lofted finish at St Mary’s, before further strikes from Mason Mount, N’Golo Kante and Michy Batshuayi sealing a comprehensive away win for Frank Lampard’s side.

It’s now eight Premier League goals in as many appearances for the 22-year-old, whose impressive form has been rewarded with an inclusion in Gareth Southgate’s England squad for the upcoming Euro 2020 qualifiers against Czech Republic and Bulgaria.

Abraham expressed his delight at breaking the deadlock against Southampton, as Chelsea moved level with points with fourth-placed Leicester City.

“It was an important first goal for us, Southampton started brightly,” Abraham told Sky Sports.

“At 2-0 they scored and we did well to stop their momentum and add another for ourselves.”

The forward latched onto a pass from fellow youngster Callum Hudson-Odoi and lifted the ball over goalkeeper Angus Gunn to put the Blues in front, with goal-line technology awarding the goal despite Maya Yoshida’s best attempts to clear.

“I knew Callum [Hudson-Odoi] would play that ball so I was ready to run in behind. I got a touch on it to get it over the keeper and it went in.”

Abraham’s eighth league goal of the season came after he had opened his European account with a first Champions League goal in midweek, and he admits it has been a special week following his performances and inclusion in the England squad.

“It’s been fantastic, I give it to my team-mates and my manager – everyone who has been behind me. When you play with great players you get your chances.”