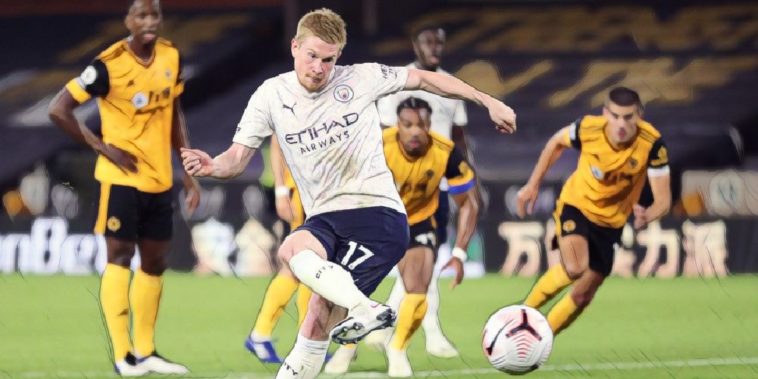 Jamie Carragher says Kevin De Bruyne is undoubtedly ‘the best player in the Premier League’ and described the midfielder as ‘a manager’s dream’ following his performance in Manchester City’s 3-1 win at Wolves.

The Belgium international starred as City began their Premier League campaign with victory at Molineux, winning and converting a penalty for the game’s opening goal before further strikes from Phil Foden and Gabriel Jesus sealed all three points.

It was De Bruyne who was the architect behind an impressive performance for Pep Guardiola’s side, however, with the reigning PFA Player of the Year central to their success as he began the new season in similar fashion to how he finished the last.

Carragher was full of praise following another stand-out showing by the 29-year-old, labelling De Bruyne as the best in the division and saying the Belgian ranks behind only Lionel Messi and Cristiano Ronaldo in terms of the world’s finest footballers.

“I used to say that about Eden Hazard before he left to go to Real Madrid. Whether he won PFA Player of the Year or not, he was still the best player.

“If you said to me, who would I want in my team? It’d be Kevin De Bruyne. The numbers he gets with assists and with goals, I just think he’s a manager’s dream.

“He played in the number 10 position, he plays right of a three and even speaking to Belgium boss Roberto Martinez, he plays him in central midfield. He will have great longevity in his career because I still think he’d have that ability to play that deep role, even if maybe his legs go a little.

“His passing ability is possibly as good as anything we’ve ever seen in the Premier League and he could play that central midfield role when he’s in his mid-thirties, not a problem.”

The best Premier League stats of the week: The brilliance of Son, Thiago and Man City

See also – Premier League Team of the Week for Gameweek 2