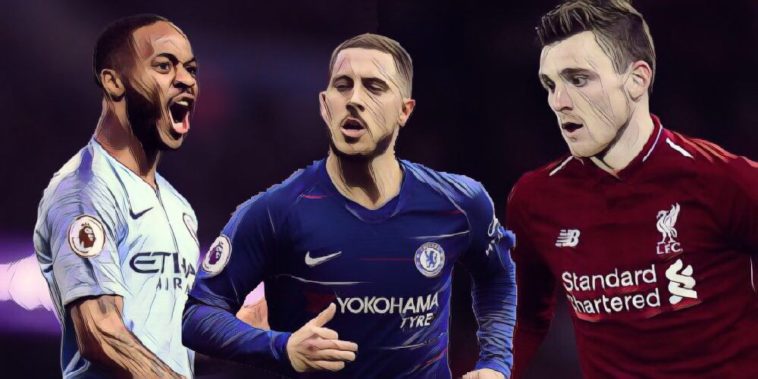 The Premier League season is drawing to a close, with just two games remaining of what has been a fascinating season.

Liverpool and Manchester City look set to take the title race to the wire, whilst there is still one place left to join relegated Fulham and Huddersfield in next season’s Championship.

Liverpool pair Mohamed Salah and Sadio Mane are competing with Manchester City’s Sergio Aguero and Arsenal’s Pierre Emerick-Aubameyang for the Golden Boot, but what about the players who have supplied those goals?

Manchester City‘s flying wingers are tied equally on ten assists each, after another productive season for the pacy pair. Sterling has continued his development into one of the Premier League’s finest players, being crowned Football Writer’s Association and PFA Young Player of the Year.

The England international has scored 17 league goals whilst providing a further 10, an assist tally matched by City teammate Sane. German attacker Sane hasn’t quite hit the heights he enjoyed during last season’s campaign, but having hit double figures for assists the 23-year-old has enhanced his reputation as one of the division’s most effective wide men.

The duo have become the first players since Wayne Rooney in 2012/13 and 2013/14 to hit double figures for both goals and assists in consecutive campaigns.

The Liverpool left-back has provided more assists than any other defender in the Premier League, in a campaign which saw him named in the PFA Team of the Year.

The contribution from wide of Robertson and fellow full-back Trent Alexander-Arnold has been a major factor in the success of Jurgen Klopp’s title-challenging side this season, with the duo having supplied 20 league goals between them.

Robertson has enjoyed a meteoric rise since arriving from Hull City in 2017, the 26-year-old having cemented his place at Anfield as a firm fan’s favourite.

A name always likely to feature high up this list, Tottenham playmaker Eriksen has been an assist-king since signing from Ajax in 2013.

Deadly from set-pieces and in open play, Eriksen has provided the ammunition this season for the free-scoring Harry Kane and Son Heung-Min.

The 27-year-old is currently 19th on the Premier League’s all-time list of assist providers, with a tally of 12 this season taking his total to 60.

Yet to sign a new deal at the club, Eriksen has been linked with moves to both Manchester United and Real Madrid.

Should the Dane depart, Mauricio Pochettino’s side will have lost their undoubted creative fulcrum.

The 25-year-old’s form has attracted interest from the likes of Arsenal and Chelsea, with the Scotland international set to be subject of summer speculation.

Fraser and teammate Callum Wilson have this season broke the record for most goal combinations in a season, the duo’s partnership a vital part in Bournemouth’s recent successes.

Chelsea star Eden Hazard is perhaps in his final campaign in English football, with speculation suggesting the Belgian will leave the club to join Real Madrid this summer.

No player has enjoyed more goal involvements this season than the 28-year-old, Hazard has scored 16 league goals to go with his 13 assists.

The talismanic winger was bizarrely left out of the PFA Team of the Year, despite being amongst the nominees to be crowned as the division’s best player.

Should Hazard leave for Spain, the Premier League will undoubtedly be worse off for it.