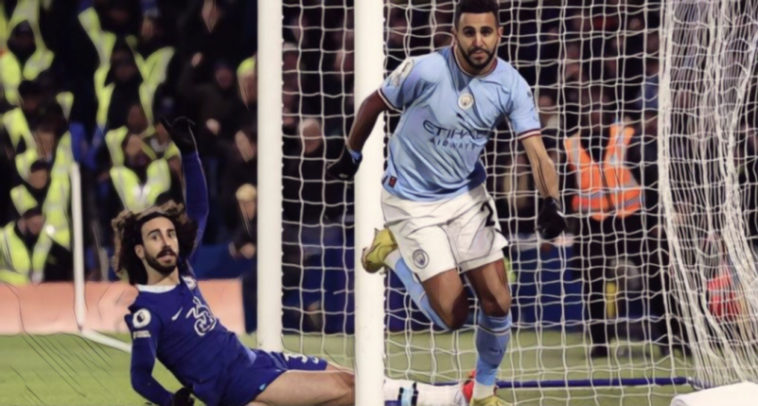 Reigning Champions Manchester City moved back to within five points of league leaders Arsenal after they secured a narrow 1-0 win over Chelsea tonight at Stamford Bridge.

Despite their poor recent form, Chelsea began in impressive fashion and Christian Pulisic looked set to give them an early lead, but Man City centre-back John Stones denied the American with a brilliant last-ditch tackle.

Pep Guardiola’s City side looked strangely off the pace although goal-machine Erling Haaland almost opened the scoring with a sharp turn and strike that whizzed past the post.

Just before the break, Chelsea came close to taking what would have been a deserved lead, but substitute Carney Chukwuemeka’s deflected effort came back off the post with Ederson beaten all hands down.

Guardiola must have read his side the riot act at half-time as they emerged a different team and within minutes of the restart, both Kevin de Bruyne and Nathan Ake nearly opened the scoring.

Just shy of the hour mark Guardiola brought on Riyad Mahrez and Jack Grealish as he looked to turn the screw on Chelsea and within a few minutes, his side was a goal ahead. De Bruyne powered forward before sliding it out wide to Grealish on the left, with the England attacker promptly delivering a perfectly weighted low ball across goal for Mahrez to tap home at the back stick.

On 72 minutes it looked like City would kill the game off only to see Haaland fall a couple of inches short of directing a de Bruyne cross into an empty net.

An injury-ravaged Chelsea pushed on in hope of finding an equaliser but City held on comfortably to win and keep the pressure on Mikel Arteta’s Arsenal at the top of the Premier League table.

Speaking afterwards City boss Guardiola admitted his side had not performed during the opening period, and revealed how big the win was for his club’s title hopes.

“We didn’t play good in the first half,” Guardiola told Sky Sports.

”I said thank you to Cancelo for his effort, playing in not his usual position. But we decided to go with a line-up where our players could adapt on the pitch if they decided to go five at the back.

“In the second half we were miles, miles better in every department. It’s a big result for us.

“Riyad [Mahrez] I knew the space would be there for him. He’s good one-on-one in the final third. John Stones he played extraordinary in the World Cup and he can adapt perfectly with three or out wide. He is playing at the best level, maybe for the first time in seven years since we arrived together. When he is playing like this it’s so good.

“Grealish’s body language is exceptional if he plays or doesn’t play. These type of guys always play good. He was really good defensively too.

“We struggled a lot in the first half, it was sloppy and slow and without rhythm In the second half it was much, much better from minute one.