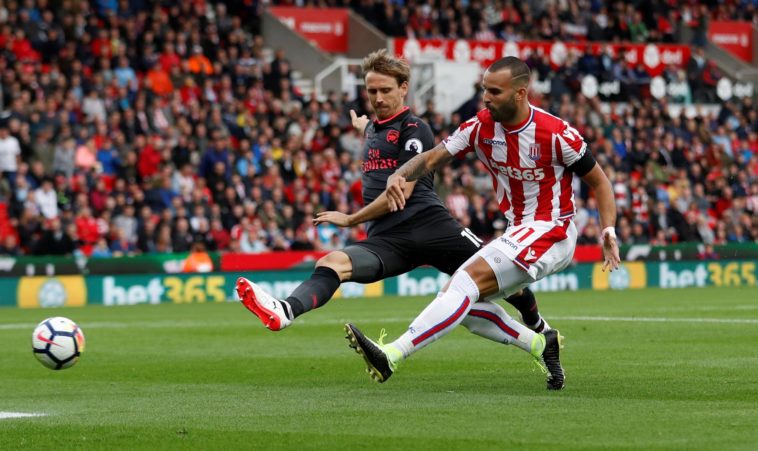 Stoke stunned Arsenal in a surprise victory at The Britannia Stadium as The Potters defeated The Gunners 1-0.

A goal from Jese Rodriguez at the start of the second half was enough for Stoke to take the three points on the night. Here are five things we learned from the game.

Wrong player at the wrong place

Arsenal had way too many players not playing at their natural position and the discomfort was quite visible on the pitch. Monreal, Bellerin, Welbeck all started in positions they are not acquainted to. Even after the substitutions later in the game, Arsenal had Bellerin, Oxlade-Chamberlain and others as well not playing in their natural positions.

What happens because of that is it brings a different responsibility to a different kind of a player. This leads to confusion and lack of understanding of the role you have on the pitch for the players. It works out in some games but it is definitely not something you can be doing going into a 38 game season.

Defensive Problems for The Gunners

Like every other season in recent years, Arsenal started this season with a makeshift defensive partnership. The fact that only one of Arsenal’s three central defenders starting the game was naturally a centre back speaks for itself.

Shkodran Mustafi was playing his first game in a while after missing preseason was the only natural centre half for Arsenal, with Rob Holding was left out. Having sold Gabriel, Arsenal will now have to really act quickly to find a defender in the market. With Mertesacker and Koscielny’s constant injury problems, and Calum Chambers rumoured to be leaving, Arsenal need to find a first team centre back if they were to even think of challenging for the title.

No Alexis, no party

Arsenal’s lack of creativity in the final third highlighted the absence of Alexis Sanchez, the Gunners’ top scorer from last season. Alexis missed the game due to abdominal pain, and is expected to return for next week’s clash against Liverpool. However, the damage has been done for Arsenal, having lost three important points.

Alexis’ partner in crime, Mesut Özil, looked really off the pace in the entire game without the Chilean international alongside him. The German did create a few good chances, but the quality of finishing was quite poor from Arsenal who clearly missed the Sanchez. If Alexis misses any more games for Arsenal, things will only continue to be tough.

Stoke played the typical Stoke City football we all know them for on a cold rainy evening, and they perfectly executed everything they had planned.

They defended well, waited for the opportunity and made sure they took their chances well. And the wait was finally over for Stoke fans when Jese scored the only goal of the match at the beginning of the second half.

This victory was a strong message from Mark Hughes’ side to the Premier League, as Stoke might be up to cause some major upsets this season for the top six teams.

Arsenal have a lot of vulnerabilities in their current side that needs improvement. They might have some better players being on the bench and injured/suspended who could help improve the team that started yesterday. But that does not mean they do not need improvement.

They need at least three new signings to strengthen three different positions, which is highly unlikely to happen given Arsenal’s transfer activities in recent years. But there are players who are expected to leave the club like Lucas Perez, Kieran Gibbs and Mathieu Debuchy for instance, which could open up the door for new ones as well.

Personally, I expect Arsenal to have a busy last couple of weeks in the transfer window, as they certainly need to strengthen in order to actually compete for the Premier League Title this season.