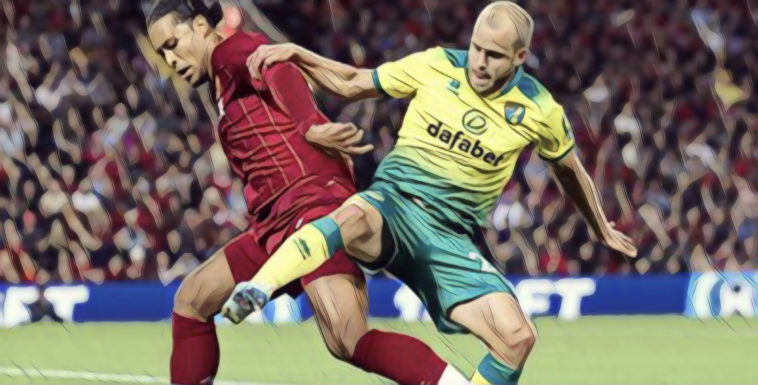 Within the opening 45 minutes of Norwich City’s 2021/22 Premier League campaign, there was already a sense that head coach Daniel Farke has a huge decision to make. One which could make or break Norwich’s survival hopes.

Finnish international striker Teemu Pukki has been at the coalface of the Canaries’ attack since signing in 2018. The 31-year-old has notched 66 goals in 121 competitive appearances, but the time may have come for City to blood his long-term replacement.

Norwich started their first home game of the season with Liverpool like a house on fire. They played with intensity and purpose and their new midfield recruits Pierre Lees-Melou and Billy Gilmour were threatening to link up with Pukki on multiple occasions, but all too often the Finn was being dragged wide and unable to connect in the middle of the penalty area. This was somewhat alarming for City fans, given that Pukki has forged a living out of lurking on the shoulder of the last defender in recent years.

Pukki was heavily reliant on his somewhat telepathic partnership with the recently departed playmaker Emi Buendia, who left for Aston Villa in the summer. The Argentine was the architect of many of Pukki’s goals at Carrow Road.

Do City have time for Pukki to build relationships with some of Buendia’s replacements in the highly-rated Milot Rashica and Todd Cantwell? That was the question on the lips of many City fans leaving Carrow Road after their eventual 3-0 humbling by Jurgen Klopp’s men.

Norwich City are notorious for being somewhat of a yo-yo club — too good for the Championship but not quite strong enough for the Premier League. While supporters of this club are never bored, they will be keen for the Canaries to establish themselves in the top flight.

Shrewd recruitment is something that Norwich City have always excelled at. Despite the riches that a place in the Premier League brings, the club has always operated in a safe and sustainable way, never spending beyond its means. By utilising external scouting agencies and analysing data, Norwich City have a good system in place and effectively unearth hidden gems in the transfer market before the bigger clubs snap them up.

This process ensures that the club can identify the players who are likely to succeed from those who are less likely. This sort of process can be seen in the online casino industry with Bonusfinder’s official UK website, where a comprehensive guide contains a list of reputable casinos’ bonuses and free spins, to ensure players get more value. It goes to show that putting in extra effort doing research can reap rewards. This strategy means that Norwich City are one of the most well-run clubs in England.

The most interesting period of Norwich’s opening day loss to Liverpool was the entrance of American striker Josh Sargent as a substitute. The 21-year-old agreed a £9m switch to the Norfolk club on the eve of the new Premier League season, having spent two full seasons in the Bundesliga with Werder Bremen.

His goalscoring record of just 13 goals in 72 games may be questionable, but the Missouri-born forward showed a great willingness to work the channels and take defenders into areas of the pitch they don’t want to be in.

As one of the club’s most expensive ever signings, Sargent has surely been signed to play a major role in Norwich’s survival bid. Combine that with the emergence of Republic of Ireland international forward Adam Idah, who came through the Canaries’ academy and is now a regular in the first-team squad, it’s clear Pukki has a fight on his hands.

In Norwich’s relegation season in 2019/20, they were too reliant on Pukki. The Finn sustained a toe injury in the latter half of the 2019/20 campaign, which left the Canaries hamstrung. This, combined with Pukki’s long Covid symptoms sustained earlier this year, means that Sargent and Idah are likely to become part of a heavily rotated forward line in 2021/22.