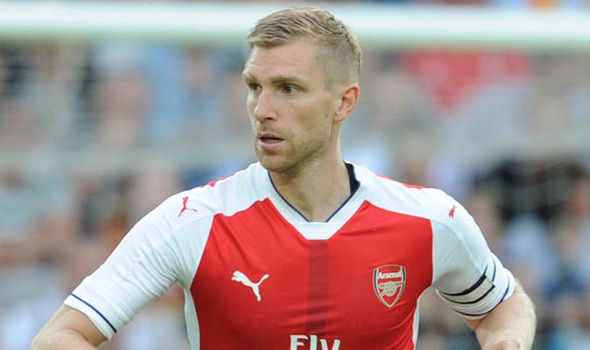 Per Mertesacker joined Arsenal in August 2011 from Werder Bremen. In the six years that have followed, Mertesacker has made 207 appearances, scored eight goals and won two FA Cups.

Arsene Wenger has confirmed that the German international will remain at Arsenal until 2018 after signing a one-year contract extension. There were no negotiations because Mertesacker had an option for an extension.

Since becoming Arsenal captain in August, Per Mertesacker has not played a single minute for the club. He is still a few weeks away from returning to action after the serious knee injury he suffered in pre season.

So why has his contract been extended? What is the point in having a leader who is not on the pitch? Arsene Wenger told Arsenal Player: “He is a leader of the team and he is also one of the four centre backs who has experience and can guide the team.”

This might be true, but the chances of Mertesacker coming back into the first team are slim. Laurent Koscielny and Shkodran Mustafi have formed a solid centre-back partnership with Mustafi yet to lose a Premier League game since he joined the club, more than any other player in the league (W10, D4, L0).

Of course Mertesacker’s experience is invaluable but he is not a vital member of the team anymore and at 32 this should have been his last season at the club.

Manchester City’s defence are in desperate need of captain Vincent Kompany to steady the ship, but the same cannot be said for Per Mertesacker at Arsenal. He is not Arsenal’s first choice centre back and his lack of pace has led to him being sent off or having to be bailed out by Koscielny.

Is it too much to ask that Arsenal have a captain who actually plays for the team rather than just being an influence in the dressing room? This is Arsenal’s fourth straight campaign with a captain who is not a regular starter.

Arsene Wenger knew Per Mertesacker would be out until the new year when he made him captain and he is still injured despite being given a contract extension. The Gunners should have been more ruthless and let his contract expire in the summer.

The contracts of Mesut Ozil and Alexis Sanchez remain unresolved and this is what should be Arsenal’s top priority.