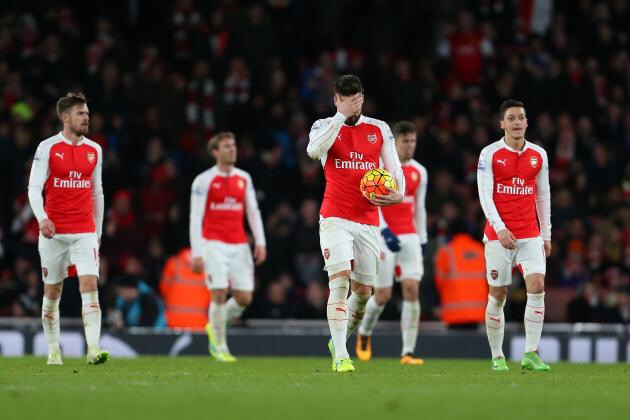 There have been many changes in football in the last twenty years. One thing that has always remained the same is Arsenal finishing in top four. Regardless of how bad they have been throughout the season, they always rally in time to secure a top four finish.

Since Arsene Wenger joined the North London side in 1996, Arsenal have finished in the top four every year. For many years now Arsenal have become very predictable.

The Gunners have a good run of form in autumn which makes everyone feels optimistic. This is followed by a significant stumble in winter (usually in November), exiting the Champions League at the last 16 stage again (Bayern Munich have a knack for knocking Arsenal out of this competition) and a late rally for fourth spot.

With that in mind, here are three reasons why Arsenal finishing outside the top four might not be so terrible.

It would give the owners a wake up call

As long as Arsenal finish in the top four, majority shareholder Stan Kronke is happy.

However, it is highly unlikely that they would be so relaxed if Arsenal finished outside the top four. With the way the current season is going, this looks like a real possibility. Any lower than a fourth place finish and it could speed up the ongoing saga of when Arsene Wenger will leave Arsenal.

Arsenal might be able to focus on the league

This might sound far-fetched considering Arsenal haven’t won the Premier League since 2004 but stranger things have happened. Playing on Tuesday/Wednesday and then on Saturday/Sunday takes a massive toll on the body. Some teams are able to handle it better than others.

If Arsenal were not in Europe and did not have to worry about getting knocked out at the last 16 stage of the Champions League, it might allow them to relax more and fully focus on the league. Of course with the teams around them getting stronger and almost certainly adding to their squads in the summer, it won’t be easy but it is not impossible.

Chelsea who will almost certainly win the Premier League this season have done so without the added pressure of European competition. Next season they will have to rotate their squad and are susceptible to more injuries with the players featuring in another competition.

At the moment, Alexis Sanchez is the most ambitious player at Arsenal and this is evident in his performances. He wants to win major trophies and that is certainly not guaranteed at Arsenal. If Arsenal missed out on the top four, it would definitely increase the chances of Sanchez’s departure. Mesut Ozil could be another major player to leave if his side are no longer in Europe.

There are some players at Arsenal that don’t seem to have the fight in them to compete for the Premier League title. Players such as Aaron Ramsey and Carl Jenkinson seem like nice guys but that’s not enough in football. Ramsey is living off the 13/14 season when he scored 10 goals and provided 8 assists. Since then, he has always played better for Wales than he ever does for Arsenal. Carl Jenkinson just needs to move on. He never been a regular member of Arsenal’s starting eleven and that’s because he simply isn’t good enough.

Finishing outside the top four might force Arsenal to be ruthless and sell players that have been coasting along for years. The Gunners have never really been in danger of missing out on the top four before. If they did, it would show which members of the squad are willing to fight for a top four place. Getting back into the top four next term will be a lot harder than it has been in previous seasons.

Some may argue that missing out on the top four would make it difficult to attract top players. This isn’t the case. Apart from Alexis Sanchez and Mesut Ozil, Arsenal have not attracted top players for years.

They have been in Europe for all 20 years of Arsene Wenger’s reign so there really is no excuse. Arsenal have missed out on the highest quality players because they don’t want to pay the going rate.

Arsene Wenger has stated that Arsenal tried to sign N’Golo Kante, Cristiano Ronaldo, Lionel Messi, Gerard Pique, Xabi Alonso and so many more. The main similarity between all these players is that have won major trophies at the clubs they joined instead of Arsenal. That’s hardly a coincidence.

As much as I always want to see Arsenal challenging for titles and trophies, missing out on the Top Four for this season could have long term benefits for the club.