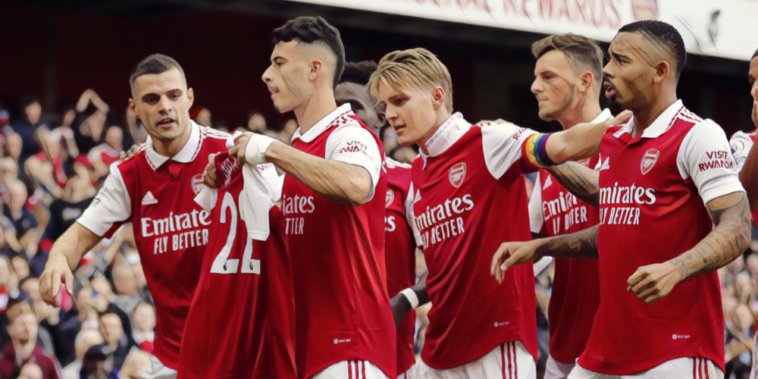 Arsenal headed into the 2022/23 Premier League season in pursuit of a first top-four finish since 2015/16, but the target has changed at the halfway point of the campaign.

It took the Gunners only fourteen rounds into the new season to transform how the world perceives them, developing from perennial top-half underachievers to genuine title candidates. Barring a 3-1 defeat at Manchester United in early September, they have gone unbeaten in their remaining thirteen league outings this term (W12, D1) to seize the top spot ahead of the mid-season break.

Indeed, it has been a fantastic season for the Gunners so far. Arteta and his squad are hoping to continue their form, as they have already broken the record for the club’s best-ever start to the season in 2007/08. Most of the top football betting sites are tipping Arsenal as close favourites to go all the way this season and win their first title since the legendary “Invincibles” team of 2003/04.

Much of the credit for the Londoners’ renaissance goes to manager Mikel Arteta, who was calling the shots during the summer transfer window and instilled the winning mindset into the Emirates Stadium locker room.  The Spaniards’ clear vision for this youthful squad has reasserted belief among Arsenal fans that the Premier League title that’s been evading them for almost two decades can finally return to north London this season.

A lack of strength in depth that tormented Arsenal in the post-Arsene Wenger era is no longer a nightmare at the Emirates, as Arteta orchestrated an almost-perfect summer transfer window.

Many were skeptical about the Gunners’ decision to land Manchester City outcasts Oleksandr Zinchenko and Gabriel Jesus in the summer. Yet it could prove a game-changer for the London outfit. While the Brazilian forward started showing his glamourous talent during the off-season, the Ukrainian left-back took a while to recover from an injury before pushing Kieran Tierney down the pecking order.

Jesus forms part of the Premier League’s second-most prolific attack this season, with Arsenal notching up thirty-three goals in the opening fourteen rounds at an average of 2.35 per game. However his latest injury issues look set to keep him out for a longer spell.

On the other hand, Zinchenko has forged a formidable defensive partnership with Ben White and Gabriel Magalhaes, leading to the division’s joint-best record of only 111 goals conceded.

History is a great teacher, and we will remind you of some exceptional Premier League successes based on an equally impressive start as Arsenal’s this term:

Let us go back to the early days of the Premier League era, namely to 1995/96 when Newcastle United, led by Kevin Keegan, clocked up twelve wins from the opening fifteen matchdays (D2, L1).

Despite starting the season without many high-profile stars on the team, the Magpies’ low expectations took exponential growth off the back of such a formidable campaign commencement. Although Newcastle eventually had to settle for a runner-up finish, there is a worthy lesson Arsenal can draw from that season – never let complacency blindside you.

Tucked in a false sense of security saw the St James’ Park club drop a significant number of points in the second half of the season, letting Man Utd beat them to the title by a comfortable five-point margin.

Jose Mourinho’s second season at Stamford Bridge was a resounding success. Not only he managed to defend the Premier League crown but led Chelsea to an utterly dominant triumph.

A record-breaking nine-match winning start was momentous for defending the title as the Blues proceeded to rack up twenty victories from their first twenty league games and served as a buffer. But unlike Newcastle, Mourinho’s men continued to build on their outrageous start to the season and went on to beat every opponent in 2005/06, which the Gunners should be looking to emulate this term.

With Brighton & Hove Albion and West Ham United the next rivals on Arsenal’s fixture list, the Gunners’ momentum from the early season should go on when club football returns later in December.

With Ferguson, you would be right to assume there was not the slightest chance the Red Devils would surrender the title to anyone else that year as they finished six points clear of defending champions, Chelsea. Of course, they lost some points every now and then, as witnessed by a five-defeat tally, yet the ability to bounce back from a failure is what defines every champion, and Arsenal should follow that example.

So, we would say the Gunners fans have every reason to look forward to the Premier League resumption on Boxing Day.