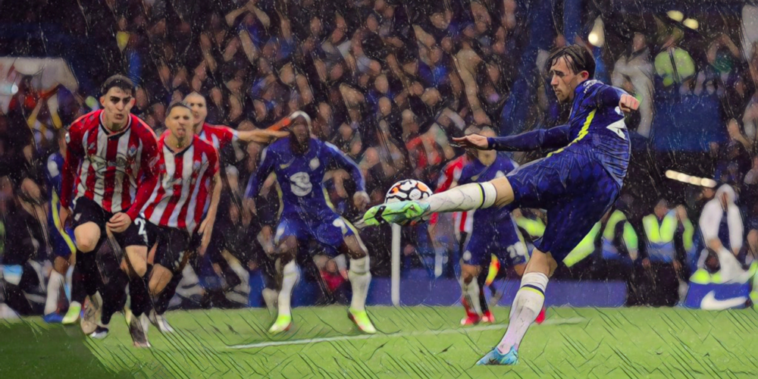 Chelsea survived a late onslaught to clinch a hard-fought 1-0 win over an impressive Brentford to move to the top of the table.

With the Bees having already enjoyed positive results at home to both Liverpool and Arsenal this season, Thomas Tuchel opted for a more pragmatic approach in order to prevent a repeat scenario, especially as he had handed a surprise first league start to young Malang Sarr due to the absence of both Thiago Silva and Antonio Rudiger.

The Frenchman – who spent last season on-loan at Porto – formed part of a youthful-looking backline alongside Trevoh Chalobah and Andreas Christensen, although the somewhat makeshift defensive unit initially did well to thwart the likes of Ivan Toney and Bryan Mbeumo.

The latter man did see his close-range effort agonisingly strike the post after a clever knockdown from Christian Norgaard, while at the other end Romelu Lukaku had a goal disallowed for offside after some initial good work down the left from the lively Timo Werner.

After the German had squandered a few good openings, the breakthrough eventually came for Chelsea just before the break via Ben Chilwell, with the left-back making it three goals in three games for club and country with a sumptuous volleyed strike from the edge of the area.

Thomas Frank’s side responded well after the break and really took the game to the visitors, with Chelsea largely penned into their own half as the Bees went in search of an equaliser.

That dominance perhaps should have led to a leveller, with Toney first seeing his fierce strike parried away by Edouard Mendy, before teammate Mbeumo squandered an even better chance after striking the woodwork for the second time.

Substitute Saman Ghoddos then fired his effort straight at the onrushing Mendy, before the Blues stopper was again called into action to brilliantly deny Pontus Jansson’s strike from point-blank range, with the newly-promoted side courageously throwing everything in pursuit of a point.

Chelsea had just 5 shots today, only against Man City have they had fewer so far this season [4]

Meanwhile, Brentford had 17 — only Liverpool [23] & Aston Villa [18] have had more vs. Chelsea this campaign

No points to show for it, but an impressive performance by Brentford 🙌 pic.twitter.com/5H8gDWXYoJ

In the end, Brentford were somehow left empty-handed despite their late onslaught, with another stunning Mendy save from Norgaard’s brilliant overhead kick a sign that it simply wouldn’t be their day.

Following that victory, which moved them back to the top of the table, Tuchel said his side were fortunate to come away with all three points, especially after having been under the cosh in the closing stages.

“In the end, the last 20 minutes were suddenly a cup game. They had nothing to lose and they found momentum. It felt like we had one player less.

“We were not clear enough in the challenges. They found the belief and we focused too much on defending.

“I was very content with the first 65-70 minutes where maybe we should have scored more.

“It helps if we have Toni [Rudiger] or Thiago [Silva] to help calm the game down and with that first touch to counter the pressure. We trust the guys who are young, if you don’t play you cannot get experience.

“It is better to be there [top of the table] but there are way too many teams who are close so it is not the main point in October.”

Chelsea are next in action at home to Malmo in the Champions League on Wednesday evening, before taking on Norwich City at home on Saturday.