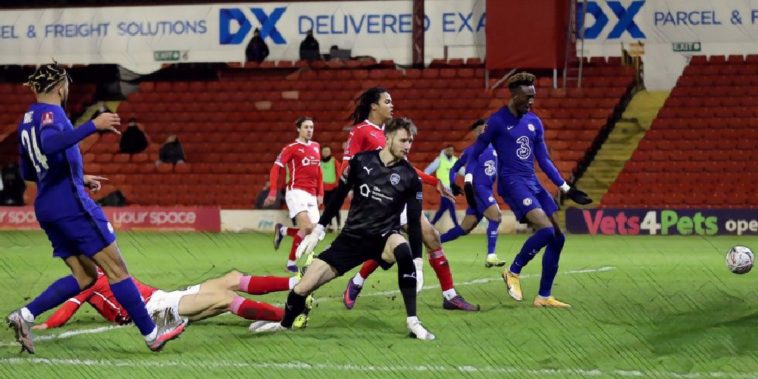 Chelsea edged to a 1-0 win over a determined Barnsley side to book their place in the FA Cup quarter-finals.

Last season’s finalists dominated possession on a boggy surface in South Yorkshire, though it was the hosts who had the better of the chances in the first half.

Much maligned Chelsea ‘keeper Kepa Arrizabalaga was forced into an early save as Barnsley’s Callum Brittain hit a close-range effort straight at the Spaniard with the goal at his mercy, while the hosts also had another huge chance on the stroke of half time, only for Brittain’s effort to strike a teammate and go agonisingly wide.

Chelsea were poor throughout the game, but on 64 minutes, they finally produced a moment of quality, Reece James finding space down the right, advancing into the box before squaring it to Tammy Abraham who poked home from inside the six-yard box.

While he scored what was ultimately the winner, Abraham would also produce a decisive moment at the other end of the pitch with 15 minutes remaining, the England international clearing Michael Sollbauer’s goalbound effort over the bar from almost on his own goalline.

For all of Chelsea’s possession, Barnsley’s persistent pressing consistently forced their Premier League visitors into mistakes, with manager Thomas Tuchel switching from a back three to a back four at the interval, and the German insisted his side can play much better than they did against their second-tier hosts.

Chelsea have now kept a clean sheet in four of the five competitive games under Thomas Tuchel.

Antonio Rüdiger remains the only player to score against Tuchel's Chelsea. 🙃 pic.twitter.com/0i56tAOkbu

“We changed to a back four and took Marcos [Alonso] out for this tactical change. Andreas [Christensen] had to go out because he had a headache,” he told BBC Sport. “The changes made it a little easier to get into the opponents half and overcome the first press.

“We did it well at the start of the second half and played constantly in the opponents half.

“We scored the goal and I had the feeling that they increased the risk but we stepped down in the little decisions. Not enough courage and it was too deep for a long, long time.

“We clearly can play better, so yes I expected more but not in terms that I am frustrated.

“If you lack a rhythm and a bit of self-confidence and you have to show on this pitch, against an opponent that takes all the risk and plays the game of his life, that is not easy. We can do better but I don’t want to be too hard on the players.”

The victory sets up a quarter-final against Sheffield United at Stamford Bridge, and the former PSG boss is expecting a tough game – the two side’s having only just met at Bramall Lane at the weekend.

“It’s going to be a tough one. They are a very physical team that presses high. They are organised but I am happy to have a home game. This is what we wanted.”

Next up for Chelsea is a home game against Newcastle in the Premier League.