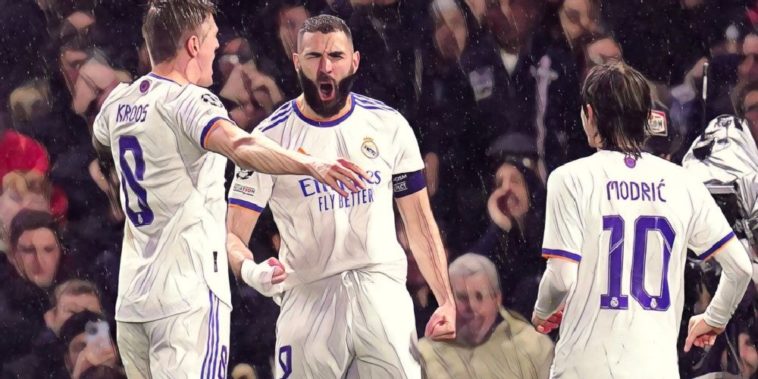 A second successive Champions League hat-trick from Karim Benzema left Chelsea with an uphill task in the quarter-final clash against Real Madrid.

Benzema had hit a hat-trick as Real Madrid beat PSG in the last 16 in a superb solo showing, and he was bang at it once again as he continued his superb goalscoring season.

Vinicius Jr was a bright spark for the Spanish giants down the left-hand side, and the Brazilian was heavily involved as Real Madrid took the lead in the 21st minute. The 21-year-old played a give-and-go with Benzema, before hooking a first-time cross back in towards the area, picking out the veteran striker who despatched a phenomenal header beyond Edouard Mendy.

Three minutes later, the Frenchman was at it again, this time, a sublime first-time cross from Luka Modric finding the 34-year-old at the back post, who again produced another marvellous header across goal to stun the home crowd.

The reigning European Champions did pull one back five minutes before the interval, Kai Havertz bravely getting his head on the end of Jorginho’s inviting ball into the box, his strong header beating former Blues ‘keeper Thibaut Courtois.

Within seconds of the second half getting underway, Chelsea gifted Real Madrid and Benzema a third of the evening. Edouard Mendy panicked in possession miles outside of his box, the Senegalese ‘keeper under hitting his attempted pass to Antonio Rudiger under the pressure of Benzema who picked his pocket and rolled the ball into an empty net from 30 yards for his 37th goal of the season.

Chelsea dominated possession in the second half, and had their chances to pull one back, though weren’t quite clinical enough in front of goal while Courtois made a number of smart saves.

Speaking after the game, Blues boss Thomas Tuchel was offered a brutally honest assessment of his side’s display.

“It is a heavy loss,” he told BT Sport. “It was one of the worst first halves that I saw from us here at Stamford Bridge. Individually and as a team it was by far not enough. It was far from our standards and then you lose games.

“Passing, where we passed, how we passed when we passed, when we attacked, the ball possession game… first half was so far from any standards that we set ourselves that we cannot complain when we lose.

“We had 16 shots in the second half. You can always come back and win it but when you kill the game by yourself after 45 minutes it is harder and harder.