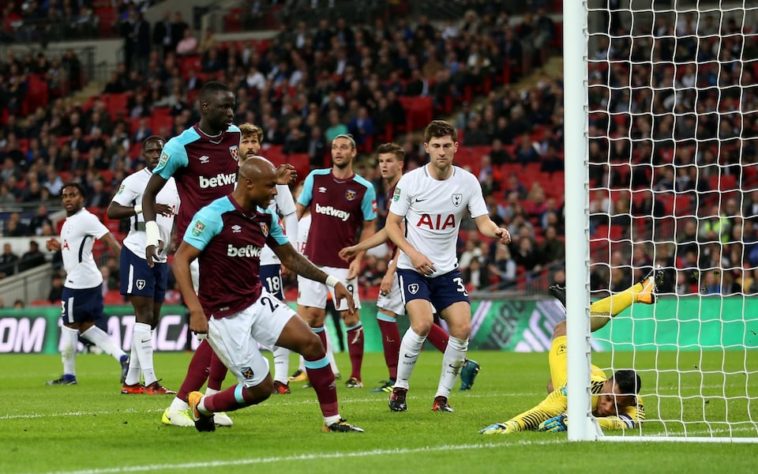 West Ham booked their place in the Carabao Cup quarter finals by producing a stunning second half performance, coming back from 2-0 to win 2-3 against Tottenham at Wembley.

Leading 2-0 at half time, with goals from Moussa Sissoko and Dele Alli, Tottenham were seemingly cruising to an Carabao Cup victory. However, they started the second half as if the game was already won and consequently they were undone.

Spurs played as if they thought the Hammers would not have the guile or willpower and drive to force their way back into the game. Never underestimate a wounded animal!

West Ham wrestled the initiative away from Spurs and ran out worthy winners. Banishing, for the time being, the demons after last Friday’s horror performance against Brighton.

West Ham have found some form

The Hammers came into this match following a 3-0 home defeat to Brighton. The club was in disarray and many thought manager Slaven Bilic would be sacked over the weekend.

West Ham’s second half performance has proved the club are up for a battle and want to play for Bilic, two things which many supporters thought was missing last Friday.

Aside from the Brighton result and losing to Spurs in September, West Ham’s performances have been steadily improving during the Autumn. Last night’s victory will put the Hammers in an excellent frame of mind ahead of Saturday’s important league meeting with Crystal Palace.

Many Premier League clubs rest players for the cup competitions these days, and I for one do not really agree with this. The cups offer a chance of glory and ultimately the opportunity to win something. West Ham are not going to win the Premier League, but the EFL Cup is a possibility.

Apart from the injured Michail Antonio and Javier Hernandez, who was on the bench, West Ham played a strong team against Spurs. This philosophy paid dividends and the Hammers are in the quarter finals of a cup competition and within sight of another game at Wembley.

Tottenham do not take the Carabao cup seriously

Judging by last night’s performance, especially the second half, Tottenham did not take the Carabao cup seriously and they paid the penalty for this misjudgement.

Unfortunately, those two major trophies are likely to prove illusive to Tottenham, and the club should have shown this particular cup competition more respect, especially as they have won it four times in the past.

Wembley is still not Tottenham’s home

Spurs have always considered themselves to be a cup team and have enjoyed quite a few cup final victories at Wembley down the years. However, playing at the famous stadium, on a regular basis and using it as a de facto home does not work.

With the exception of a few choice league fixtures, Spurs cannot fill Wembley. There were many empty seats for last night’s game, even before spectators started to leave early.

On the reverse side of the coin, West Ham filled their section of the stadium. Away fans are enjoying their away trips to the famous venue.

West Ham may not have been able to turn this fixture around had it been played at White Hart Lane, but playing the game at Wembley certainly helped the cause. It produces a level playing field, as it is not anyone’s home stadium.