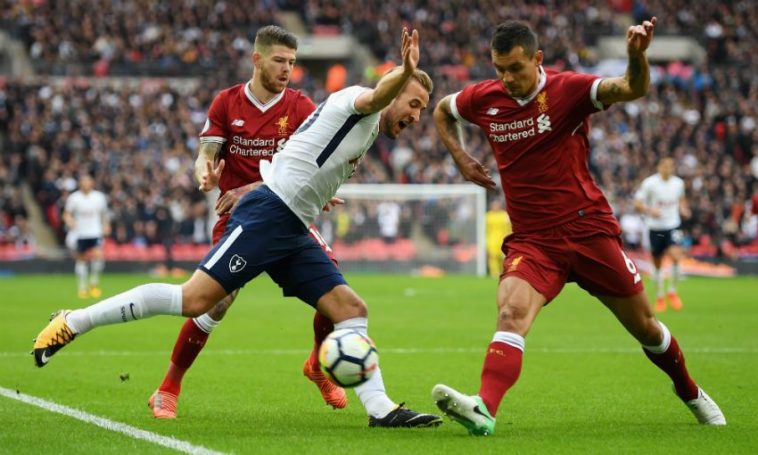 Liverpool’s woeful defending cost them once again as Tottenham romped to a 4-1 win at Wembley. Here’s our match report.

Spurs were looking to continue their recent fine form which saw them earn an impressive 1-1 draw away at Real Madrid last time out. Tottenham finally lifted the Wembley curse in their last home match against Bournemouth and were looking to build some momentum at home. Eric Dier is only on the bench for Tottenham meanwhile Serge Aurier got a starting spot.

Liverpool made one change from their 0-0 draw with Manchester United. Gini Wijnaldum missed the match with a knee injury which saw Milner come in to the line-up following an impressive performance in Liverpool’s 7-0 win over Maribor.

Spurs sprinted out the blocks and quickly got the first chance of the game. Just four minutes in Kane got on the scoresheet. It started with a Spurs throw-in which Lovren unbelievably tried to play offside from. Trippier played the ball in behind for Kane who rounded an onrushing Mignolet and slotted home. Lovren has to take the blame for that goal.

It was a shambolic start for Liverpool and they were made to pay on 12 minutes. Lloris hurled the ball forward for Kane who got away from Lovren. This time Lovren sprinted for a header which he completely missed. Kane crossed the ball perfectly for Heung-Min Son who fired in on the volley, 2-0 to Spurs.

Liverpool’s defence might have been a mess but they showed they were still a threat going forwards. Kane lost the ball in midfield which resulted in Henderson curling a through ball up to Salah. The Egyptian had too much pace for the Tottenham defence and prodded the ball past Lloris. The ball bounced in off the post to make it 2-1.

With half an hour gone Lovren’s miserable performance was put to an end. Former Arsenal player, Alex Oxlade-Chamberlain, came on to replace him to the jeers of the Tottenham fans.

Just before half time Spurs regained their two goal lead. Emre Can fouled Dele Alli and the resulting free-kick was poorly cleared by Matip. The ball fell to Dele Alli who volleyed in from the edge of the box. Spurs were good value for their 3-1 lead at half time.

Tottenham continued their impressive performance in the second half. Ten minutes in to the half, Spurs got their fourth of the game and second from a free-kick. Mignolet came to catch the ball from the wide free-kick but he failed to get a strong hand on it. Vertonghen rifled the loose ball towards goal but it was blocked well on the line by Firmino. However, Kane was on the scene to pounce and coolly slotted in to make it 4-1 to Spurs.

In the opening 30 minutes Dejan Lovren put in one of the worst centre back performances you’re likely to see in the Premier League. In truth, Liverpool were lucky to only concede twice in that period.

With Lovren off the pitch Liverpool looked instantly better. They managed to improve from abysmal defending to pretty poor. The rest of his teammates still struggled to contain Tottenham’s outstanding attack.

Coutinho, Firmino and particularly Salah looked lively upfront but they were let down by the shambles behind them. Liverpool lacked any sort of cohesion and were recklessly lashing at the ball with no purpose in mind.

Whilst Liverpool were dreadful a massive amount of praise has to go to Tottenham. Harry Kane took the game to Liverpool and bullied the defence all game. Heung-Min Son teamed up with Kane well, providing supporting runs in behind which the mostly slow Liverpool defence were unable to keep up with.

Now that Tottenham have found their rhythm at Wembley they could go on to become a real contender for the title.

Man of the Match: Harry Kane