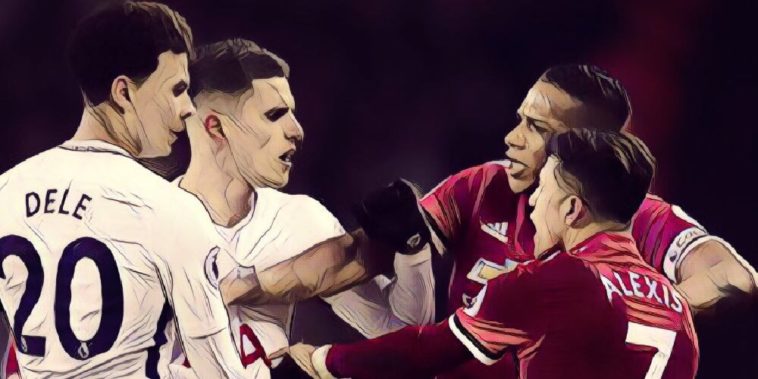 Manchester United finally give out their Christmas presents

After not conceding a goal since Boxing Day, Manchester United were in a very giving mood at Wembley on Wednesday night. A series of defensive errors throughout the 90 minutes could have gifted Tottenham an absolute hatful of goals. They did in fact gift Spurs both of their goals, with Phil Jones being the most culpable. The England international failed to get to a high ball forward, which led to Christian Eriksen opening the scoring in under 11 seconds, before then scoring a goal of his own with a fine finish, albeit in the wrong end.

While Manchester United were an absolute shambles at the back, Spurs were the exact polar opposite. United actually looked decent for the first 20 minutes or so in an attacking sense, but they couldn’t break down a resilient Spurs defence. Sanchez and Vertonghen did well in the middle, while Trippier and Davies helped Spurs in their attacking play too.

Speaking of Spurs’s attacking threat, Wembley’s temporary tenants were sublime, especially the Man of the Match Eriksen. The movement and creativity of the Dane, as well as from Kane, Alli, and Son caused United’s back for problems all night long.

After impressing on his debut, albeit against Yeovil Town, Alexis Sanchez struggled to get into the game at the home of his former side’s fiercest rivals. While it wasn’t a surprise to see his every touch jeered by the home support, he was also the target for some rough treatment. The Chilean was on the receiving end of a pretty petulant swipe by Spurs resident bad boy, Dele Alli, who was subsequently subbed.

The question on everyone’s lips since Alexis Sanchez moved from Arsenal was ‘Where will he play?’. He started his debut on the left, although that was in a heavily weakened side, but the true acid test was during his Premier League debut. Anthony Martial has done excellently in that wide right role recently, having scored in his last three outings, but strangely, he was the one who seemed to make way for the Chilean.

Martial was shunted out to the right during the first half where he was virtually invisible and ineffective. He was then brought to the left in the second half which subsequently saw Sanchez vanish too.

Personally, I think this game was won and lost in Jose Mourinho’s team selection. While Mourinho claimed the game was decided by two defensive errors, for which he is technically not wrong, United were lucky to leave Wembley with just a 2-0 scoreline against their name.

Spurs dominated the defence, and they dominated the midfield too. Paul Pogba was seeing being absolutely hammered on the touchline by Mourinho for not following out his instructions, before eventually being brought off.

However, despite Jose traditionally ‘parking the bus’ in big games, United seemed far too open in the midfield, which allowed Spurs’ attacking foursome to pressurise the back four. In my opinion, this was a game that Mourinho should have started in a 4-3-3, with Herrera, and Matic doing the pressing in the middle, and allowing Pogba to be relieved of some of his defensive duties.

As it was, playing with Pogba in the midfield, and with Spurs on the front foot, it was almost like playing with 10 men.