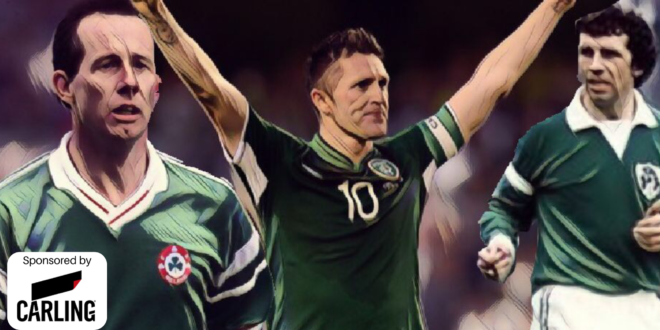 There have been plenty of ups and downs since the Republic of Ireland played their first international football match at the 1924 Olympics in France.

Despite having produced a huge amount of talented players that would star for big clubs across the water, and becoming the first country to ever beat England in 1949, we would have to wait until 1988 to see The Boys in Green in action at a major tournament.

Few can argue that the glory days of Irish Football came between 1988-1994 with the country going bonkers after Big Jacks sides qualified for two World Cups and a Euros, and the Italia ’90 soundtrack is still widely regarded as the greatest piece of music ever produced.

After a tough couple of years for Irish football fans, a feel-good factor is starting to grow amongst supporters, with the League of Ireland thriving and plenty of hot young prospects coming through the international youth teams.

In celebration of our beautiful little island’s footballing heritage, we’ve put together the Ultimate Irish Football Quiz™, and we’ll make no bones about it, you’ll need a seriously well-rounded knowledge of Irish Football to gain a decent score. So it’s time to get your competitive juices flowing, have a go, and then share it with your mates to see who comes out on top…

Our Ultimate Irish Football Quiz is brought to you in association with our friends at Carling, who’ve just launched a superb new inter lockable glass that allows you to carry four pints easily. Now if that’s not an innovation we can all get behind, we don’t know what is!