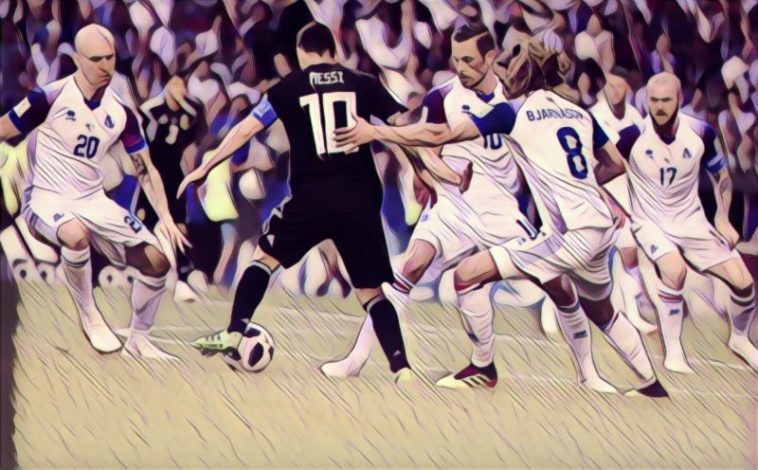 The 2018 FIFA World Cup carnival has rolled into town in its full verve. With two full rounds of games finally over, we now have a fair idea of how the teams are bedding in. We’ve seen upsets aplenty in Russia. What big sides face the prospect of an early exit? We have taken a look at some of the biggest names who face an early exit from the World Cup.

Despite being blessed with galactic talents such as Lionel Messi, Sergio Aguero, Paulo Dybala, Gonzalo Higuain and Angel di Maria, the Argentinians somehow find themselves staring down the barrel – despite having the best odds on World Cup 2018 in group D. They are the highest ranked team in the group, at 5th, while the next best team, Croatia, is ranked 20th.

Undone by a gritty defensive display by overwhelming underdogs Iceland in their opener, Argentina would’ve still fancied their chances to progress. However, it only got worse from there – another disjointed effort in attack, and calamitous errors in defense were met by a lethal Croatian side in their next match. Argentina lost 3-0 courtesy of goals from Ante Rebic, Luka Modric and Ivan Rakitic, their worst group stage defeat since 1958 – putting their chances of progressing past the group stage in serious danger.

Argentina have looked out of sorts in attack. Despite possessing a host of talent, the Latin American side been overwhelmingly dependent on Messi to inspire them. Although their talisman bailed them out in the qualifying stage, scoring a hat-trick against Ecuador to lead Argentina to Russia, Messi himself has looked out of sorts in their two matches thus far. The defence hasn’t been very impressive either – goalkeeper Willy Caballero made an error against Iceland, and a blunder to let Croatia open the scoring in the second match.

Nigeria’s 2-0 win over Iceland – for the large part – has handed Argentina a lifeline. Argentina now need to win their final game against the African side, and hope that Iceland fail to win against Croatia – Iceland could win against Croatia, but Argentina would then need to win by two goals more than the Icelanders. A resurgent Super Eagles could prove to be tricky opposition for an Argentina side facing infighting in their camp with manager Jorge Sampaoli’s position threatened, and anything but a win would result in elimination.

Much like the 2014 runners-up, Argentina, it hasn’t exactly been smooth sailing for defending champions Germany. Exposed in their opening game by a lively Mexico side – who took advantage of Germany’s vulnerability on the counter, the Germans faced the prospect of an early exit – both 2010 and 2014 also saw the champions being eliminated in the group stage.

In a must-win encounter against Sweden, coach Joachim Low made some big calls – dropping linchpins Sami Khedira and Mesut Ozil. Despite a fiery start, Germany found themselves down at the break, courtesy of a delicate chip from Sweden striker Ola Toivonen. A loss would have certainly knocked them out, but the Germans found just enough in themselves to live to fight another day – a Marco Reus goal right after the half-time break saw them back in the game. Toni Kroos, the culprit for giving the ball away in the lead up to the first goal, made amends, with a stunning curling effort from a set-piece routine deep into stoppage time.

Germany will be expected to win against Korea Republic, where a win would all but seal their progression – unless for an extremely high-scoring one goal victory for Sweden against Mexico. However, it won’t be easy – Germany could take the field without their two first-choice centre backs – Jerome Boateng is suspended after picking up a red card in the victory against Sweden, whereas Mats Hummels missed out that game with an injury and remains a doubt. Sweden bettering Germany’s result would see Mexico and Sweden go through.

Germany’s campaign has also seen reports of infighting within the camp, with many Germans in the squad upset with Mesut Ozil and Ilkay Gundogan’s decision to pose with Turkey president Recce Tayyip Erdogan, as well as a split camp over Manchester City winger Leroy Sane’s exclusion from the squad. Progression might yet lead to a shocking early exit – provided Mexico don’t lose against Sweden, Germany will finish 2nd, which could see them face pre-tournament favourites Brazil in the round of 16.

Joint pre-tournament favourites with Germany before the tournament kicked off, Brazil haven’t had the best time in Russia either. Brazil were held by a stubborn Switzerland side – who executed their plan to neutralize Brazil superstar Neymar to perfection. Despite immense attacking talent to call upon, Brazil did not show many promising signs, requiring a moment of Philippe Coutinho magic to break through the Switzerland defence before being undone on a corner.

They took on another resilient side in Costa Rica in their second match. Brazil again looked forlorn of creativity, struggling to break through the Central American side’s defence. They did win a penalty, only for it to be overruled by VAR – Neymar was adjudged to have dived. It took them the stoppage time to find a breakthrough via Coutinho, before Neymar scored in the 7th minute of added time – before falling onto the turf and letting out tears, perhaps of frustration.

Brazil – unlike Germany or Argentina – haven’t lost yet, but haven’t looked at their best either. They now face a fired up Serbian side in their final group game, where a draw will still take them through. But it won’t be easy – Serbia have plenty of talent, and will no doubt be fired up after losing late on to Switzerland, in a tense clash marred by VAR controversy and then Balkan politics.

Much like Germany, though – progression could still lead to early elimination. If Brazil top their group, as expected, and Germany finish 2nd, the two sides will meet each other in the second round, meaning early elimination for one of the joint pre-tournament favorites in World Cup betting tips. Brazil will have revenge firmly on their minds – the last time the two sides took on each other, Germany emerged 7-1 victors in one of the darkest nights in Brazilian history. But perhaps the expectation and want of revenge could prove to be too much.