The strong influence of football and its fanbase has always attracted the corporate society. Among many companies involved, the gambling industry has made a powerful sponsorship deal with soccer clubs, which is an old and robust relationship.

While these sports stakeholders and sportsbook or casino operators have become brothers-in-arms, it is pertinent to take a crucial look into how this came to be. Hence, this article focuses on the steady prevalence, beginning with history.

There is an in-depth focus on why betting and casino agencies get involved and what each party benefits. There are also discussions on how much clubs receive based on these sponsorships. Instead of only dwelling on the other positive side, we look at the associated risks a club might face by entering into an agreement with gambling companies.

When it comes to the history of gambling sponsorships, the first record of a relationship between gaming businesses sponsoring football can be traced back to the early 90s, particularly 1992. In the EPL, Stoke City was the first ever to be involved in such a deal, as the popular Betting and Racing Exchange sponsored them.

Further records revealed a contract signed by more brands as more countries moved to legalize all forms of online gambling, including wagering on sports. By the late 90s, several clubs had a partner in the gaming businesses. A few included Manchester City, Aston Villa, Arsenal, Chelsea, Liverpool, and Ipswich.

How the Gambling Industry has become linked to Football

Such partnerships between gaming agencies and football clubs are prevalent in almost every global league. This link has yielded good fruit, thanks to the fans. It is not uncommon to find players who follow their passion for the game of soccer by staking and predicting matches.

Yet, there have been cries from some quarters regarding the morality of the situation.

The link between gaming agencies and football clubs has become successful, thanks to the huge acceptance by fans. While most spectators follow their passion for the game to predict and bet on matches, bookmakers have taken the deals to a new level.

Currently, football stars and teams have become the face of these betting brands in a bid to encourage more of their followers to bet. In return, some stadiums are being named after the companies. This synergy has continued to show progress in how gambling is accepted by society.

As stated, such agreements have been met with stiff resistance, even with their growing popularity. Sponsorship of clubs by iGaming sites in some regions has come under severe risk, especially with a potential ban incoming. According to analysis, the total number of gaming brands involved in sponsorship and branding of the front shirts has seen a sharp decline between 2019 and 2022, a whopping 48 percent.

The UK government is discussing moves to enforce a crackdown on betting ads pre-2023.

However, while some clubs are moving to stop the branding of front-shirts, top clubs vying in the English Premier League, including Chelsea, Arsenal, Liverpool, etc., are still heavily backed by brands.

Football analysts around the world are still optimistic about the future of such deals. For instance, the association overseeing Major League Soccer in the USA accepts deals with different gambling companies, including casino operators. They want to include many people from those who love playing games in Texas to those choosing an online casino from the reviews on iGambler in Michigan. This is because all of these people are a part of the big game, make a unique atmosphere at the stadium and make football the most popular sport in the world.

Presently, more football fans and lovers wager more, unlike before. Expectedly this trend is only in the early stages and is expected to blossom more in the future. As the partnership continues to increase in other jurisdictions, it is hard to conclude that the EPL will thoroughly wash its hands off such sponsorships since it has become highly profitable.

How Much Do Clubs Receive?

As an unwritten rule, most football teams never declare how much they receive as part of the proceeds. Such an amount of the deal is kept confidential for both parties and the Federation. However, it is possible to make guesses following analyses from our experts and reports from the media.

Based on projections, such sponsorship deals are worth approximately £90 million annually. While it is possible to think this figure is exaggerated, we believe the amount to be close since brands sponsor a good chunk of teams playing in the EPL. This amount could be attributed to how individual gamblers and companies invest in smaller clubs, helping them to grow, especially those with sponsorship deals.

What are the Benefits for the Clubs?

In addition to the financial remuneration, there are other aspects or areas why a team will choose to accept gambling and casino sponsorship with the relevant brand. 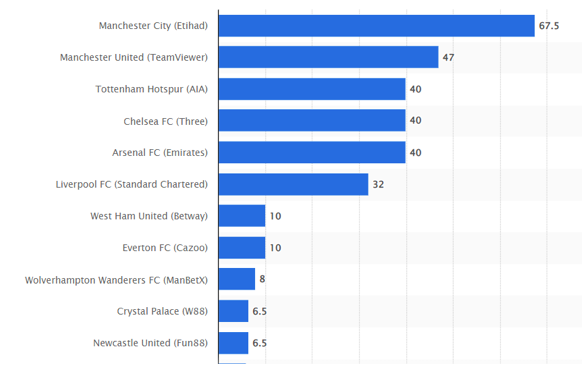 It is understood that a club’s huge success is also measured by the size of its fan base. Such partnership has been seen to help clubs reach new territories that would have been challenging at first. Most betting companies, for instance, now market teams’ tickets and throw in a part of incentives to regions that may be entirely interested in soccer or the team.

In addition, various gambling businesses are involved in corporate responsibility and social projects. A clear example is how iGaming brands offer to build additional public spaces inside and around stadiums.

What are the Risks for Clubs?

The number of benefits is enormous for all parties involved, but there are also high risks. First, the moral obligation has become a ranking point for critics of such agreements.

In addition, a club can stand to lose its reputation if its sponsor is involved in any act of scandal. By their partnership, it could leave a stain on the club. According to facts, the iGaming industry accounts for 9.2% of total shirt partners for the EPL, followed closely by Automotive, which is at 10.5%.

While there are still other significant risks, we believe that all clubs consider this and ensure they are protected by a clause in the contract, running it through their legal departments. This protects them from future lawsuits or public embarrassment.

The Future of Betting Sponsorships in Football

There is no clear statement regarding the future of such partnerships, especially in the English Premier League. There is the possibility of gambling businesses being replaced as partners in the future to avoid sanctions by the government. Currently, sponsorships from gambling companies have become a huge source of income for clubs. This is directly reflected in the budget, especially for the transfer market. It gives teams a chance to sign on top players, significantly boosting revenue, which benefits all stakeholders, including the football association.

Thus, this trend may not change anytime soon. The vast benefits and exposure both sides enjoy will raise objections and pressure on the government seeking to place bans. Football is a significant export of the UK, and making a move to silence it could bring protests and uproars.