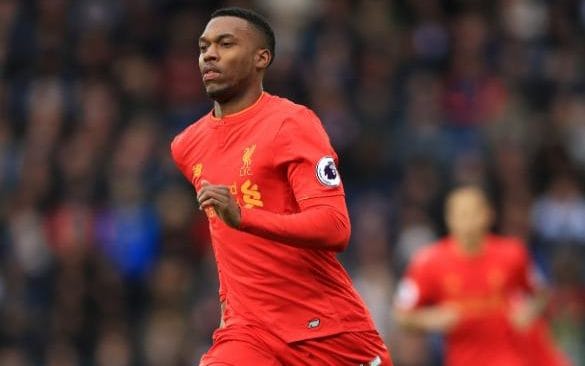 After Brendan Rodgers signed Sturridge for £12m he made a dream start to his Liverpool career by scoring just seven minutes in to an FA cup game for the Reds.

He then scored on his league debut for Liverpool against rivals Manchester United after coming on as a half-time substitute. In his third game he made his first league start for Liverpool scoring in a 5-0 hammering of Norwich City.

It was at this point Liverpool realised they had signed the perfect partner for Luis Suarez.

Scoring three goals in his first three games was a sign of things to come as Daniel Sturridge went on to have one of the best goals per minute ratio’s in the Premier League.

In Sturridge’s first four seasons with Liverpool he amassed 43 goals in just 69 games. His peak came in the title challenging 13/14 season when he returned 21 goals in 29 games. This led to him finishing second top scorer in the Premier League behind strike partner Luis Suarez.

Whilst the amount of goals Sturridge scored is very impressive his games played was not. Recurring injuries in his first four seasons meant that he only played more than 14 league games once.

In the last 5 seasons, Daniel Sturridge is the ninth most injured player in the Premier League amassing a total of 640 days out because of injury.

Gradually these injuries have caught up with Sturridge. Once a player known for his incredible goal scoring record, he is now known more as a player with an incredible injury record. The amount of injuries may have finally taken their toll as Sturridge has only scored two goals in his 15 league appearances this season.

These injury problems have seen Sturridge drop down the pecking order at Liverpool. Roberto Firmino and Divock Origi are now preferred to him despite Sturridge being unusually fit to play.

When Suarez left for Barcelona in 2014, Liverpool pinned their hopes on Sturridge staying fit and leading their frontline. However to Liverpool’s frustration that has not been the case. Since the 13/14 season no player has scored more than 13 goals in the league for the Reds.

Even now that Sturridge is fit he cannot force himself in the starting line-up despite injuries to Sadio Mané, Phillipe Coutinho, Adam Lallana and Danny Ings. To make matters worse an out of form Divock Origi is starting ahead of him.

Daniel Sturridge looks a frustrated figure on the Liverpool bench. His chances this season have been numbered even when he has been fit enough to start. This leads to his manager, Jürgen Klopp, having an important decision to make.

There is a chance that Klopp may use pre-season to attempt to fully embed Sturridge in to the starting XI, but the chances of this are very slim. It is much more likely that Klopp will decide to cash in on Sturridge and replace him with a striker that can be relied upon.

There are sure to be many potential suitors for Sturridge that are interested. However Liverpool has apparently placed an astounding £40m price tag on him. This is sure to put Sturridge as a big gamble for any club willing to pay that price.

One of those clubs could be West Ham. Hammer’s boss, Slaven Bilic, has sung his praises in recent weeks stating, “When he is on fire, he is a great player. We are going to see. We have our list of strikers. If you go back two or three seasons he was unbelievable”.

West Ham look Sturridge’s most likely suitor and we could see him return to London this summer to partner another perennially injured former Liverpool striker in Andy Carroll.

Wherever Sturridge is playing next season his time at Liverpool so far should be deemed a success. He may have suffered from injuries but he was able to push through those setbacks and come back as good as ever. However it looks as though it may have been one step too far this season and it may be best for all parties if he looked to recapture his form of old away from Anfield.