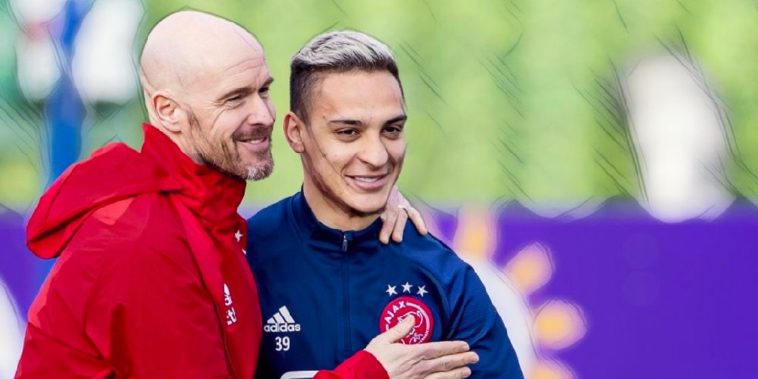 Manchester United are reportedly interested in a deal to sign Ajax winger, Antony, despite Erik ten Hag having a ‘gentleman’s agreement’ with his former employers.

United look set for one of their biggest summers in recent years, with five first-team players having left the club on free transfers, with a number of other players also believed to be surplus to requirements.

Midfield additions are believed to be the main priority following the departures of Paul Pogba and Nemanja Matic, with the club in talks with Barcelona over a potential deal to sign Frenkie de Jong.

De Jong previously worked with Erik ten Hag during his time at Ajax, the pair winning the Eredivisie and infamously reaching the Champions League semi-finals in what was a memorable 2018/19 campaign.

Since Ten Hag has taken over at Old Trafford, Manchester United have been linked with a whole host of the Dutchman’s former players, with Brazilian winger Antony the latest to be strongly linked.

According to the Times, reports linking United to Antony are genuine, with the left-footer potentially filling what has been a long-standing problem position for the Red Devils on the right of their attack.

Jadon Sancho was signed last season in a £73 million deal from Borussia Dortmund in the hope of filling the role, but has delivered his best performances on the left, a position that Marcus Rashford has also seems to prefer.

The Times says that Antony ‘is on their attacking list’ of targets, though a deal ‘is not thought to be at an advanced stage’ as they currently focus on strengthening their midfield.

Following his move to Manchester United, Ten Hag refused to rule out raiding Ajax for their best players, though the report does say that he entered into a ‘gentleman’s agreement’ that he would not ‘gut the team’.