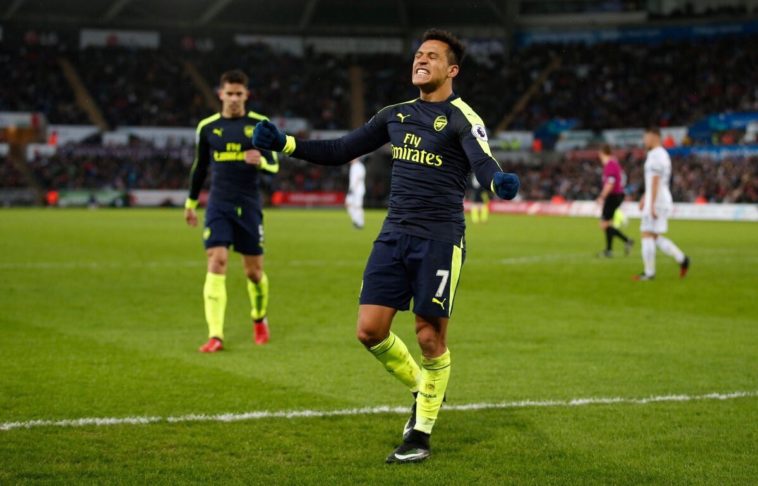 Just like his predecessor, Paul Clement’s first Premier League game as Swansea manager was against Arsenal. Unlike Bob Bradley, Clement had the home advantage but unfortunately for the Swans it didn’t make a difference as they lost 4-0.

Arsenal got off to yet another shaky and slow start with Kyle Naughton nearly giving Clement a dream start to his reign. Gylfi Sigurdsson had a chance minutes later but he blazed it over the bar. Swansea had the better opportunities in the opening 20 minutes with Arsenal yet to grow into the game.

The Gunners had the majority of the possession but they failed to make it count and Swansea were able to contain them. Ozil kept dropping deep to receive the ball due to Swansea’s high press.

But then, in the 37th minute Giroud finally broke the deadlock with an effort from close-range. That’s his fifth goal in his last five games for the Frenchman who has just signed a new contract with the club. He may not be an automatic starter, but Giroud’s importance to Arsenal cannot be underestimated.

There was controversy just before half-time when Ki Sung-Yueng went down in the penalty area. Mike Jones waved it away and gave the South Korean a yellow card for simulation. It was the correct decision from the referee after Ki left his trailing leg to initiate the contact from Laurent Koscielny.

Giroud seemed injured after picking up a knock on his ankle but he came back out in the second half and appeared to be over it which was good news for Arsenal.

Wenger’s men had a much better start to the second half and were causing plenty of problems for Swansea after pressing high. Sanchez, Aaron Ramsey and Alex Iwobi all had chances to increase Arsenal’s lead. They were finally rewarded for their persistence in the 54th minute when Iwobi’s shot ricocheted in off Jack Cork to make it 2-0.

After the goal, Paul Clement immediately took off Nathan Dyer and replaced him with Leroy Fer.

Alex Oxlade-Chamberlain replaced Giroud on the hour mark which was sensible considering the slight ankle injury he picked up earlier.

Alex Iwobi forced another own goal, this time from Kyle Naughton to give Arsenal a three goal lead. Everything that could go wrong went wrong for Swansea and it was not a happy home debut for Clement.

Sanchez finally got a goal for his efforts and made it 4-0 to Arsenal. In his last 32 Premier League appearances for the Gunners, he has scored 21 goals and provided 10 assists. The Chilean is now the joint-top scorer with Diego Costa. Both players are on 14 goals this season.

Arsenal won the match 4-0 and kept a clean sheet. Their performance was much improved in the second half and Swansea were unable to cope. The Gunners moved back into the top four while Swansea remained bottom of the Premier League. Paul Clement has a lot of work to do if he is to improve his new side and ensure they avoid relegation.