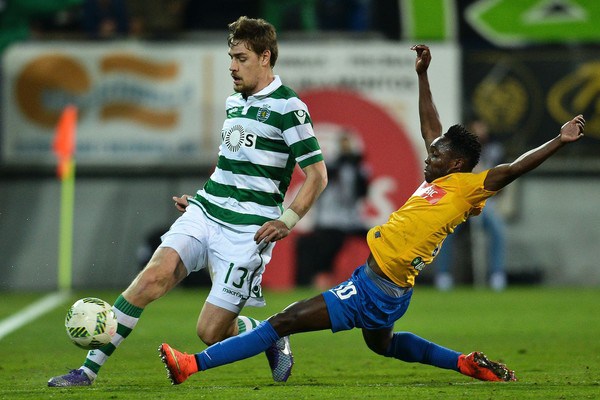 Sporting secured a 2-1 victory over Estoril in annerve-wracking finale.

The Lisbon players were high-spirited coming into the match, owing to their recent admittance into the Champions League group league and their huge wins over the past week.

The Lions started off extremely well with an attentive Gelson driving the ball into the goal from Acuña’s excellent ground cross assist.

Only 10 minutes into the match and Sporting managed to strike again. Bruno Fernandes produced his third outside-the-box goal this season from a direct free kick. The young Portuguese hammered the ball into the top right corner, doubling Sporting’s one goal lead.

The home team’s oppressive pressure slowly dissapeared after the second goal, giving Estoril time and opportunity to recompose and fight for a potential win.

Sporting continued strong in defense though and the first half was mostly controlled by them. The only exception was a corner kick for the away team, which saw the ball gliding past the goalposts, grazing Kléber’s head.

The Leões had one more opportunity to make it three later on. Following another great cross by Acuña, Moreira stretched just enough to pound the ball from Dost’s reach. The ball landed on Gelson’s ready-to-score head, but it sailed high.

The second half began and a greatly dull inactivity from both teams ensued for most of the time, with Sporting still being in control of the game.

The monotony of the match started fading away in the last 15 minutes. From a free kick, the ball was crossed into Estoril’s box and it made great contact with Battaglia’s head, but Moreira was alert and managed a great save.

Evangelista finally added another goal chance to the Canaries’ tally with a good, strong shot, caught by Rui Patrício.

In the 85th minute is when the game got really interesting. A crossed ball from Estoril saw an easy clearance by the home defense. With the sphere bouncing gently away from the penalty box, Evangelista swooped in and volleyed the ball solidly from the edge of the box. To everyone’s surprise, the ball charged into the back of the net, with a save from the keeper being deemed impossible.

This unexpected success to make it 2-1 stirred the home team and the pursuit for a third goal began.

Soon afterwards, it nearly came to be. Dost was all set to score, following Piccini’s superb cross, but another great save by Moreira stopped it from happening.

Madness ensued during stoppage time. Sporting carried out another brilliant attack and from another good cross, Dost finally headed the ball home. Or so it seemed, as the goal was then disallowed by usage of the new video assistant referee, showing an offside positon.

The stadium went silent in the last minute of the game, as Estoril Praia managed to produce the goal they needed to take a point with them. Except the VAR struck again, also disallowing the team’s goal, resulting from, yet again, an offside position.

With an end of a match stressful enough to cause heart failure, Sporting Lisbon collected their fourth victory in four league games, continuing their winning ways.

The Lions currently stand in the first position alongside Porto, following yesterday’s draw between Benfica and Rio Ave.