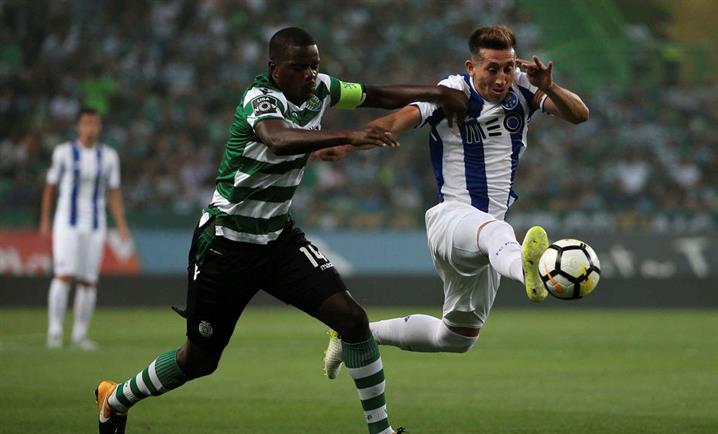 In a hotly contested battle between league leaders, none managed to secure the victory they sorely needed.

This season’s first game between Portugal’s “Big Three” was finally upon us and the fans held their breaths for the crucial changes that might come of it.

Porto were highly motivated coming into this match. Not only were they occupying the first podium positon but they were fresh from a massive win against Monaco in the Champions League. Sporting, on the other hand, were a bit more uncomfortable, coming from a loss at the hands of Spanish giants Barcelona.

After a week of anxiousness and excitement, the time finally came and the match began.

The first ten minutes saw little action from both teams with the first dangerous shot arriving in a saved long attempt by Layún.

A few minutes later Porto achieved another opportunity to score following a great pass by Brahimi to Aboubakar. The striker proceeded to spin skillfully past a defender before striking the ball just wide of the post.

From then on, Porto started to take control of the game. A near replica of the previous attacking play took place between the exact same players, although this time they exchanged roles. Aboubakar managed to successfully dribble past two defenders before offering the ball to Brahimi who struck the ball well but was saved nicely by Patricio.

The league leaders continued to pressure the home team with multiple dangerous offensive attempts at goal but never finding the back of the net.

It was close to half-time when Sporting finally got their first goal opportunity. The ball was crossed into the box and was met by William Carvalho’s head, which saw the ball sail towards the top of the goal before Casillas stretched to parry it out.

The last attempt of the first half was arguably the best one yet. With Porto attacking yet again, Marcano rocketed the ball into the penalty area from half-way. Marega found the ball and headed it confidently towards the goal but it met the crossbar instead. Aboubakar still managed to reach the ball on the rebound but Sporting’s saviour denied the goal yet again.

When half-time arrived, Sporting were in desperately in need of some inspiration for the second half. Porto, on the other hand, felt they had played well, although they still needed to keep it up for the rest of the game to achieve a win.

The referee proceeded to blow the whistle to signal the start of the second half in the still goalless match.

Just like the beginning of the game, the first 10 minutes of the second half didn’t bring an awful lot of interesting action.

It started to shape though when Sporting were given a ridiculous chance at scoring. Following a Porto throw-in close to their own penalty area, Danilo received the ball but clumsily lost it to Bruno Fernandes right outside the box. The Portuguese, however, failed to deliver, sending the ball way over the crossbar.

Sporting, after a weak first 45 minutes, changed the game around and started to take control over Porto. They had another opportunity when a well-placed cross from a free kick saw the Spanish keeper struggle to intercept it. The home team were still looking for the rebound goal but William’s shot sailed high.

Coming into the last quarter of an hour, Porto won a throw-in close to the opposing area. Sporting protested the decision and the Dragões took advantage of that momentary distraction and gave the ball to Otávio who was alone on the wing. The home team tried to react as fast as possible to the situation but the player had already crossed it low to Aboubakar. Fortunately for the Lions, Rui Patricio continued to prove he was their hero and saved his team from what could have been the end of the match for them.

Porto could have got a last minute win with a free kick during stoppage time. Alex Telles took it right outside the penalty area and launched it towards the top right corner. It would’ve been a goal but Patricio continued to be alive and well.

The 90 minutes were finally up and the ref blew his whistle. The match ended as a goalless 0-0 draw. Sporting received a heck of a fright in the first half but then managed to become more composed in the second, although Porto were clearly the dominant team, statistically speaking.

There were no changes to the top four of the Liga NOS, as all four teams received a single point after Benfica and Maritimo’s drew as well. Porto lost their first points this season in this match, but they remain at the top of the table, two points ahead of Sporting.