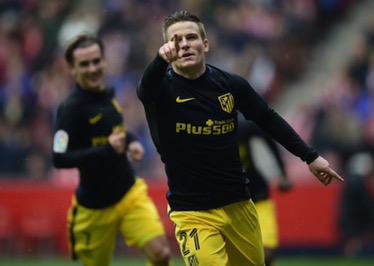 Sporting came into this game in the relegation zone, knowing a win against the team fourth in La Liga would get them out of trouble temporarily. In this fixture last season, Sporting were able to distinguish Atletico’s hopes of a second league title under Cholo.

It was the home side who started off better, pressurising the visitors with 6′ 8″ forward Traore bossing Lucas around at the back. This was until the 12th minute when Angel Correa fed the ball into Griezmann’s feet who allowed the ball to roll across his body and fizz a shot just wide of the post.

Sporting got more and more into the game, coming closer to taking the lead. They were a danger at set-pieces, Traore the obvious target, but he is not just an aerial threat – after winning a battle for the ball with Savic, he found himself one on one with Moya. Savic had a lot to thank the backup goalkeeper for as he came up on top for Atletico.

It was the Ivorian forward who was in the thick of it once again as he smashed the outside of the post just before the break.

The Asturian side may have had the better of the first half, but that was all thrown away in an astonishing thirteen seconds. Yannick Carrasco latched onto a Fernando Torres flick-on and scored on his second opportunity.

The goal didn’t seem to affect them, however, as Sergio Alvarez controlled the ball and powered the ball into the back of the net. Despite being put under pressure by two Atleti players, Savic was left on the line helpless.

A couple minutes later, he was picked out at the far post by Douglas, but his effort was agonisingly close – bouncing over the crossbar.

The game seemed to go Atletico’s way after Alvarez’s chance. Antoine Griezmann’s effort disallowed for offside, maybe the wrong decision as it seemed he was in line.

Simeone brought on Kevin Gameiro in the second half, and what a substitution it was. The French pairing linked up for Atletico’s second as an inch perfect pass from Griezmann played in Gameiro who showed great composure to go around the stranded Ivan Cuellar to tap home.

A couple minutes later, Gameiro made it 3-1 and sealed the win as Thomas Partey won the ball back, Gameiro took the ball off of him and slotted with ease.

A superb individual performance was rounded off when Griezmann picked up another assist and Gameiro finished the job placing the ball in the same corner again.