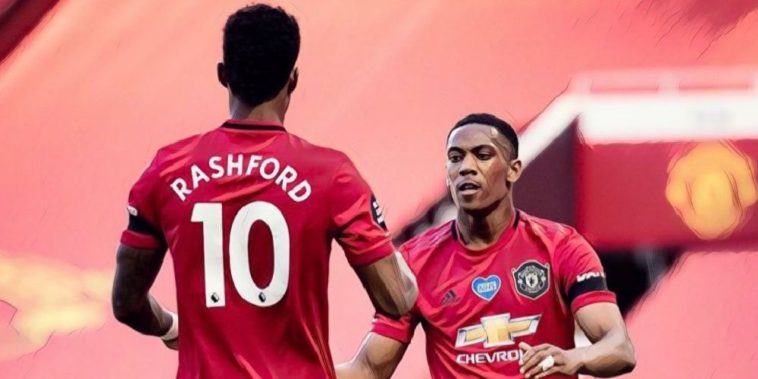 Manchester United missed the chance move up to third, conceding a 96th minute equaliser against Southampton in an entertaining game at Old Trafford.

Southampton have enjoyed an impressive run of form since the Premier League‘s restart last month, putting in some impressive performances and picking up some notable results, and after 12 minutes, they deservedly took the lead.

Paul Pogba was caught on the ball on the edge of the box by the feverish Danny Ings, the ball falling to Nathan Redmond who floated a delicious pass over the United defence which was smartly controlled and finished by Stuart Armstrong at the back post.

The opener seemed to wake United up though, and eight minutes after falling behind, the Red Devils were level. Paul Pogba helped to make amends for his part in the Saints goal, pinging the ball into Anthony Martial who took an excellent touch, held off his man, and laid it off to the onrushing Marcus Rashford who finished first time with his left foot for his 15th of the season.

Having grabbed an assist for the first, Martial put United ahead three minutes later, finishing off a swift counter-attack with a rasping finish into the top corner after driving into the area from the left flank, the Frenchman becoming the 10th Manchester United player to score 50 Premier League goals for the club.

The second half was pretty even, with both side’s having chances to score, but deep into injury time, Southampton bagged the leveller. United – down to 10 men due to a Brandon Williams injury – failed to defend a wicked James Ward-Prowse corner, with Ireland international Michael Obafemi poking home at the back post following a near post flick on.

Speaking afterwards, Ole Gunnar Solskjaer admitted his side ‘didn’t deserve three points’ despite them playing ‘some quality football at times.

“It was the worst time to concede a goal but it happens in football,” Solskjaer told Sky Sports. “We have won so many games in that way. It is all part of the learning for this team.

“You think you have three points in the bag but we probably didn’t deserve three points today. Southampton are good team, they run, and run and chase.

“We never got into our rhythm today. We played some fantastic football at times. The two goals we scored were very, very good.

“I don’t think tiredness the case. It was just one of those days we did not take our chances and they took theirs. David de Gea had one really good save but apart from that we had the bigger chances but you are not going to be given three points and Southampton are a very good side.

“We defended well until that corner. It is disappointing but that’s football. I know the feeling the other way as well.”

The result leaves United in fifth, level on points with Leicester and a point behind Chelsea in the chase for Champions League football with just three games to go, though they do still have to play Brendan Rodgers side in the last game of the season, while Chelsea have games against Liverpool and Wolves to come.