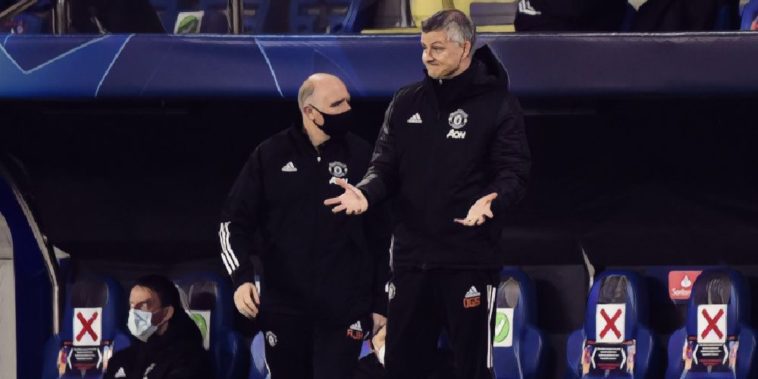 Ole Gunnar Solskjaer was critical of his side’s woeful defensive showing after Manchester United were humbled away to Istanbul Basaksehir in the Champions League on Wednesday evening.

Solskjaer made a handful of changes including handing Dean Henderson his first Champions League start, as United came up against a side that included former full-back Rafael Da Silva as well as familiar names in the form of Martin Skrtel and Demba Ba.

Lining up in their striking third kit, the visitors looked comfortable early on, before some woeful schoolboy defending saw former Newcastle United and Chelsea man Ba with a free run at goal to slot home an unlikely opener for the Turkish champions – the Red Devils seemingly forgetting the offside rule.

The goals against us….please tell me someone is going nuts in that changing room and people are being made accountable.
The shape of the team when we lose the ball for the 1st goal 🤬😱🤯#mufc pic.twitter.com/V7aq0rvBYL

The away side soon lost their rhythm in attack and were once again found out defensively, with danger man Edin Visca latching onto a Deniz Turuc low cross, before firing home past a helpless Henderson to put the hosts 2-0 up. To United’s credit, they responded soon after, with Luke Shaw’s dinked cross finding Anthony Martial who headed home brilliantly to reduce the gap just before half-time.

In the second period United struggled to really get going and despite introducing the likes of Edinson Cavani and Paul Pogba, there few notable openings for the visitors. Solskjaer’s men did think they’d rescued a point in the dying minutes, only for Alexandra Epureanu to brilliantly clear the ball off the line to make it two defeats in two for United in all competitions.

That loss saw the Red Devils once again exposed defensively, and boss Solskjaer was hugely disappointed in particular with the “unforgiveable” defending for the Basaksehir opener.

“Performance was not good enough against a team that worked and ran and hit us on the break a couple of times,” he told BT Sport. “They scored two goals, like you do in Europe, when you do not defend well enough.

“The first one is that we play a short corner and forget about the man up top. That is unforgivable. The second one as well, we are not very well organised to counter the press. Two tough goals to give away and then we did not have enough to come back in the second half.

Let’s not let the comical nature of the first Basaksehir goal take away from how comically bad this United defending is btw pic.twitter.com/miMTyROc7I

“Anthony Martial scored a good goal but the second half we threw everything at it and could not break them down.”

The shock defeat will do little to ease the pressure currently surrounding the Norwegian, with United having been so poor in the 1-0 loss to Arsenal at the weekend, yet despite the set-backs, Solskjaer was looking ahead to the weekend’s huge clash with Carlo Ancelotti’s Everton at Goodison Park.

“They (two losses) have set us back a lot. You get a reality check every time you play a game of football. Nothing becomes history as quick as a football game.

“You don’t turn up and get three points in the Champions League. They are a team well organised and we were not good enough. That is it.

“It is not to be easy to be positive now, when you have just lost the way we did but these players are good and we have a good chance on Saturday morning to get going again.”

United face the Toffees at 12:30 on Saturday afternoon in the Premier League.