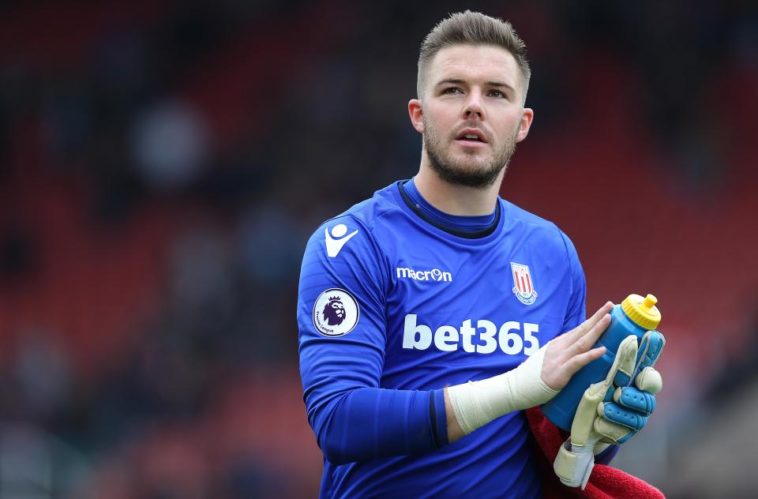 In light of Joe Hart’s performance against Scotland and varying season at Torino, is it time someone else was England’s number 1?

Stoke fans, myself included, have been chanting “England’s number 1” at Jack Butland for 2 seasons now. Obviously Butland’s last season was limited due to a recurring ankle injury. But now he is back to full fitness, should Butland be England’s man between the sticks?

Since the sale of Asmir Begovic to Chelsea in July 2015 Butland has undoubtedly been Stoke’s first choice stopper. In the 2015/16 season Butland played 31 Premier League games and kept 10 clean sheets. At a glance these stats don’t look incredibly special. But Stoke’s defence that season was undoubtedly poor and Butland always had plenty to do. Butland won several awards for his performances including Stoke City’s player of the year.

Butland appeared to be on track to become a world class goalkeeper. This was cruelly interrupted by an initially innocuous looking injury against Germany. Butland was seizing one of his limited chances in net for England before an awkward kick left him with a fractured ankle. This was on the 26th March 2016, after many setbacks his return to the Stoke team wasn’t until 22nd April 2017 in a 2-0 loss to Swansea.

It is worth mentioning that in Butland’s absence Lee Grant put in some excellent performances earned player of the year for 2016/17. Butland’s end of season cameo was arguably an insult to Grant, but he certainly showed some of why he had previously been player of the year. Stoke finished the season in poor form but Butland’s return was a nice highlight.

While he was at school Butland was a keen rugby player. This visibly helps his goalkeeping ability as he is well built and a safe pair of hands. The attribute which initially brought him most praise from Stoke fans was his ability to command his box. Butland was fearless gathering crosses and in one on one scenarios, most likely down to his rugby days as mentioned.

Butland began to come to the attention of more mainstream media with a series of man of the match performances. He gained a lot of attention for his performances within the space of 4 days between the 27th and 31st of October 2016.

On the 27th he starred in a league cup win against Chelsea, saving an Eden Hazard penalty to send Stoke through to the next round. 4 days later he kept a spectacular clean sheet away to Newcastle. Steve McLaren confessed afterwards that: “Jack Butland was the difference between us getting one point and three points today, but for him we would have won the game,”

As well as his substantial build and height, Butland has excellent reflexes. He is very proficient in one on ones and reacts very quickly to deflections. He is prone to the occasional bit of overconfidence with the ball at his feet, but other than that he is an incredibly reliable man to have in goal.

So who stands in the way of Butland in the contest for that number 1 jersey?

There is definitely some case that Joe Hart deserves the benefit of the doubt. Before his season at Torino and arguably poor Euros Hart was a top keeper. He put in some great performances for Manchester City and showed he is capable of making spectacular saves. Hart also has more experience than a lot of his rivals for the England goalkeeping position. Hart has over 100 Premier League clean sheets and holds 4 Golden Glove awards, a record.

Fraser Forster has also been in and around the England squad recently. The Southampton stopper is an incredibly commanding presence, standing at 6 foot 8 inches tall. He is a strong and capable keeper, with 86 Premier League appearances and 33 clean sheets. Forster’s only real weakness is his struggle to get down quickly. As demonstrated by the goal he conceded to Zlatan Ibrahimovic in the League cup final, it’s difficult to get that big frame down to low shots in corners.

Other notable competitors for the England number 1 spot include experienced Tom Heaton; Prodigious Jordan Pickford and the consistent Ben Foster.

England manager Gareth Southgate undoubtedly has a rich array of goalkeepers at his disposal. But should Butland be his number 1? If not who should? Let us know in the comments.