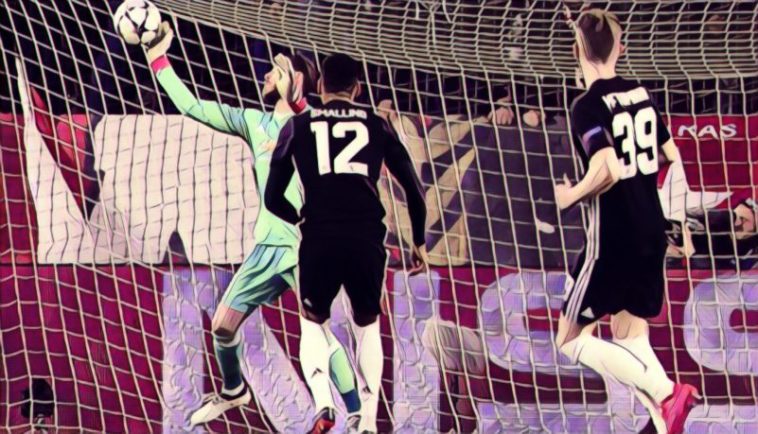 The reds came up against Sevilla in their first leg of the round of 16 clash. The Ramon Sanchez Pizjuan Stadium is notoriously difficult to play in and the reds did struggle in what was overall a fairly disappointing game. Here are five things we learned in the fiery-tempered first leg of the clash.

The selection of Scott McTominay in the starting lineup, ahead of club record signing Paul Pogba, raised a few eyebrows to say the least. Social media went into meltdown upon discovering that the French midfielder had been left out of the starting lineup, given that this came on the back of weeks of rumours of a rift between Mourinho and Pogba.

Whilst this choice to drop Pogba does perhaps suggest that there is something not right between Mourinho and Pogba, it highlights the huge trust he places in McTominay. The 21-year-old Lancashire born midfielder, made what was only his fourth champions league appearance, so he is still relatively inexperienced. However to start McTominay ahead of Pogba, a Champions League finalist with plentiful experience in the competition, does demonstrate the trust and respect Mourinho has for McTominay. The midfielder put in a very respectable appearance yesterday and earned widespread praise. Mourinho’s decision largely paid off.

Pogba is always there when you need him

When Ander Herrera collapsed to the ground, with an apparent muscle injury within the first 20 minutes of the game, there were worried faces on the pitch and amongst the away fans.

But Mourinho didn’t look too worried, as French midfielder Paul Pogba was already prepared to make his entrance and take over from his injured Spanish teammate. Even though there is clearly something not quite right between Pogba and Mourinho at the moment, the midfielder showed the manager and the fans they can count on him. Though his performance was definitely by no means the best fans have seen of Pogba in a United shirt, the young French midfielder still used the opportunity to step up and was clearly happy to get minutes on the pitch.

De Gea truly is the best ‘keeper in the World

United have David De Gea to thank for keeping them in the tie. Sevilla struggled, as did the Reds, but still managed to get away eight shots on target (compared to United’s one). However every time these shots were met by the firm hands of David De Gea, who once again had an excellent game gallantly defending United’s net. The 27-year-old’s saves on the stroke of half time were undoubtedly the highlights of the game and demonstrated that De Gea is definitely the world’s best.

Other teams are wary of Sanchez and Lukaku

At times it seemed that the intense action of the game was separated only by world-class saves from David De Gea, Sevilla players diving, and fouls on Sánchez and Lukaku. In fact the first half seemed to be a continuous stream of fouls on United’s attacking pair.

This shows just how cautious other teams are of the danger that Lukaku and Sanchez can cause and their attacking prowess. The pair should take it as a compliment that other teams are so afraid of them and their potential and use it to spur them on to inflict further damage in the second leg of the tie.

It is all still to play For

No team really dominated the match last night. United put on an overly defensive performance and had very few real chances. Sevilla had 25 shots, but couldn’t really do anything with them, with their players often just blasting the ball way over De Gea’s net. Neither team was really on top last night and though United are expected to snatch the tie in the next leg at home, Sevilla still have it all to play for as they face United in the second leg at Old Trafford in March