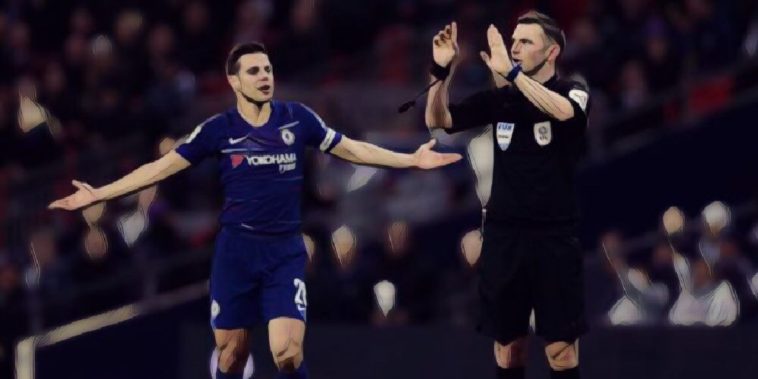 Maurizio Sarri was left absolutely furious with the decision to award Tottenham Hotspur a penalty as his side were beaten 1-0 at Wembley in the Carabao Cup.

Chelsea lost the first leg of the Carabao Cup semi-final by a solitary goal from Harry Kane, who smashed home his spot-kick after the VAR had taken what seemed like an age to make a decision. Having decided that Kane was onside, the VAR rightly adjudged the Chelsea ‘keeper Kepa Arrizabalaga to have brought down the England captain, with Michael Oliver being instructed to point to the spot.

While the view that the VAR had to look at seemed to show Kane’s run being onside, there was another angle that suggested that Kane’s head and shoulders were, in fact, offside, and speaking after the game, Maurizio Sarri was furious with the decision and the ability of English referees to use the current technology.

“A few minutes ago I watched the video from our camera. It was offside. Our camera was in line with Harry Kane,” Sarri told Sky Sports.

Wanna take a look at this? Clearly offside.

VAR is an absolute shambles. pic.twitter.com/qrwgkITYb6

“Offside with the head, the knee. Offside. It was really important the linesman carried on running, he had a big impact on our defenders.

“I don’t think English referees are able to use the system.

“If you are not sure with the system, you have to follow the ball and at the end of the action decide. But he stopped it and didn’t follow the ball – for our defenders it was offside. I don’t know about the goalkeeper but sure the defenders.

“I think they have to study the system.