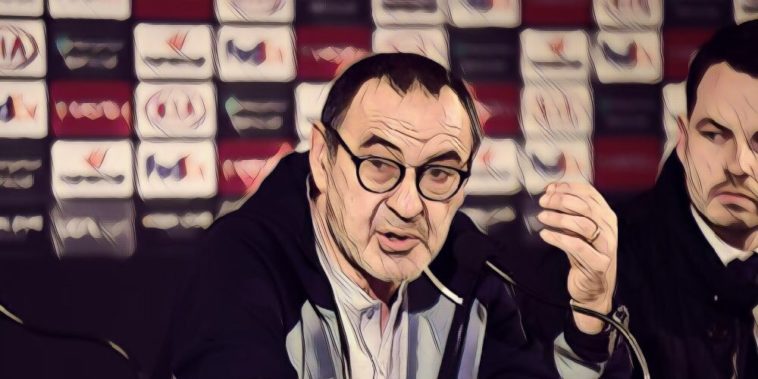 Maurizio Sarri is not expecting an easy passage to the Europa League semi-finals despite grabbing a late winner in the first leg against Slavia Prague.

Sarri started tonight’s game in the Czech Republic with the likes of Eden Hazard, Gonzalo Higuain, N’Golo Kante and David Luiz on the bench, while Callum Hudson-Odoi didn’t even make the 18 man squad.

The Chelsea manager eventually called upon Hazard and Kante in the second half with the game still goalless, before left-back Marcos Alonso finally broke the deadlock with just four minutes to go to secure a 1-0 win.

Speaking after the game, however, Maurizio Sarri warned that next weeks return leg at Stamford Bridge will not be an easy encounter.

“I think we knew very well that it would be really very difficult,” he said in his post-match press conference.

“The opponents are very physical, very aggressive and so we knew we had to face difficulties during the match. We were able to front up and face them well and then, in the second half, we were able to play better.

“We need to think the second leg will be difficult, too, because these opponents are dangerous away – like in the round against Genk. We need to be careful.

“I am happy with the result and also the performance because, in this moment, we were able to suffer [and come through]. In the past, we weren’t able to suffer in difficult moments.

“This is not for the first time but in the past, when we were in trouble, we conceded immediately. Now we can fight and suffer without conceding. That’s a step forward.”