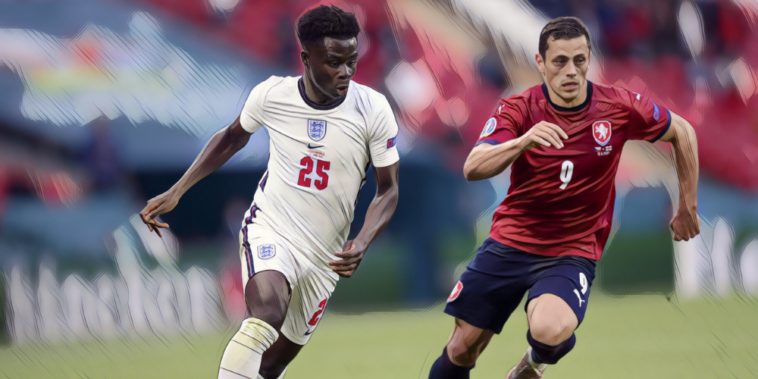 Gareth Southgate is expected to change England’s formation for their last-16 clash against Germany this evening, with Bukayo Saka set to retain his place after impressing against the Czech Republic.

Phil Foden, Jack Grealish and Mason Mount could all be named only amongst the substitutes as Southgate shuffles his pack for the huge showdown with the Germans at Wembley, with reports that the England manager will revert to a back five system.

Foden started each of England’s opening two fixtures, though was not named in the squad for the 1-0 win over the Czech Republic on Tuesday amid the threat of a potential suspension and progress already assured.

Despite Southgate’s decision not to risk the Manchester City midfielder, The Athletic understand he is unlikely to start this evening as Southgate changes his formation, whilst Mount is also expected to be named as a substitute after returning from a period of self-isolation.

The report says that Saka is expected to retain his place in the starting side however, after being named as man of the match during the win over the Czech Republic, Southgate praising the ‘exceptional quality’ of the Arsenal teenager following the win at Wembley.

Jack Grealish also made his first start of Euro 2020 in that fixture and impressed, though the Aston Villa captain is expected to return to the bench this evening to accommodate the change in shape.

Southgate has used a 4-3-3 or 4-2-3-1 variant for the Three Lions group stage campaign, though England are anticipated to begin with a back five system and wing-backs against Germany, who have utilised a similar system during their three Euro 2020 fixtures to date.

It is thought Kieran Trippier and Luke Shaw will be selected as the wing backs, with John Stones, Kyle Walker and Harry Maguire set to be the central defenders.

Declan Rice and Kalvin Phillips are expected to continue their partnership in the middle of midfield, with Saka joining Raheem Sterling and captain Harry Kane up front.