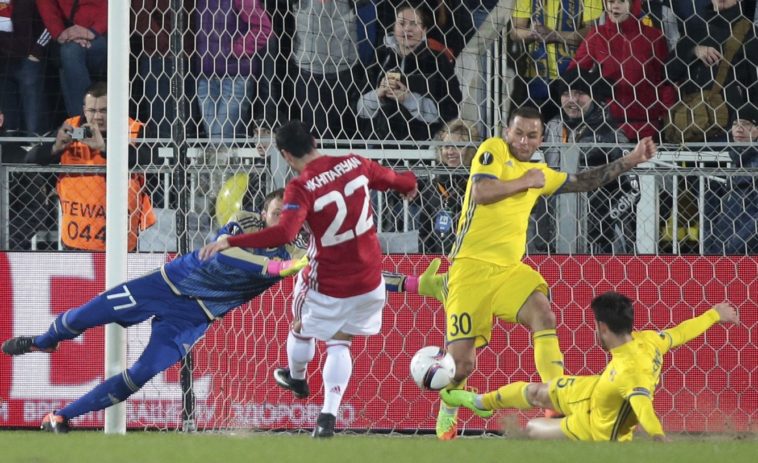 A game in which the word long is probably the best describing word, long winded, long balls, long throws.

Before the game Jose Mourinho confirmed his team where going to adapt to the conditions of the game, mainly the pitch with a more direct style of football.

Mourinho surprisingly changed his formation to a back three to match up with the system that Rostov deploy. There may also be more to it with the Chelsea game ahead on Monday and of course Chelsea play with a back three like Rostov. Perhaps Mourinho was looking to rehearse the system change ahead of the visit to Stamford Bridge?

From the off it was clear that the game was not going to be one for the football purist to enjoy. The constant use of the long ball from both teams meant the game had no real flow or pattern to it. At times the ball was hardly on the ground as the two teams played pin ball with the ball.

Chances were scarce but it was with their first decent bit of play that United got their goal. A long ball to Marouane Fellaini in the width of the box was brought down by the Belgian. He passed to Ibrahimovic who found Henrik Mkhitaryan in the six yard box to tuck the ball into the net and give United the precious away goal in the tie.

The second half saw a slight improvement in Rostov’s play with the Russian side posing more of a threat to the United goal.

A defensive calamity saw United fail in their attempt to play offside. Alexandr Bukharov’s run was found by a delightful pass from Dzmitry Molosh that allowed the big striker the time to bring the ball down and smash the ball into the net to make it 1-1.

A goal that clearly highlighted that United are not adept to playing with a back three with the unawareness of Phil Jones in this situation.

The rest of the second half dropped into the pattern of pin ball again with both sides struggling to deliver any real quality.

In the game United’s passing accuracy was  incredible low, just 61% in fact. It is not hugely surprising though, given the way United had to play the game because of the shocking state of the pitch, if you can call it a pitch that is.

Jose Mourinho will be happy to get the away goal and take Rostov back to Old Trafford for the second leg where you expect United should have no problem imposing their usual style of football on an actual pitch.