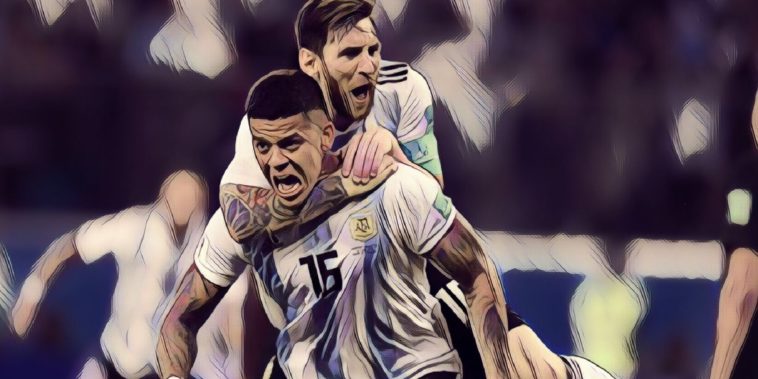 Manchester United defender Marcos Rojo has revealed what Lionel Messi told them at half time to inspire them to victory against Nigeria to seal their place in the knockout stages.

It had been an absolutely dreadful start to this summer’s World Cup for Argentina, who unexpectedly drew their opening game against minnows Iceland, before being hammered 3-0 by Croatia, with Lionel Messi failing to find the net.

There have been fairly strong rumours of dressing room unrest within the Argentina camp, with manager Jorge Sampaoli coming under pressure.

Knowing that a win would send them through to the knockout stages, Messi finally opened his goalscoring account in the first half before Chelsea’s Victor Moses levelled the scores from the spot to leave Argentina’s hopes hanging by a thread.

Then, in the 86th minute, Manchester United defender Marcos Rojo, who has scored just one goal in his four years in the Premier League, popped up in the most unlikely of positions in the box, to fire the two time World Champions into the knockout stages with a fine right-footed volley.

However, before the start of the second half, Argentina’s players had been spotted having a huddle in the tunnel, with Lionel Messi leading the rallying cry, and Rojo has revealed that it was his words that inspired him to become the last gasp hero:

“During half-time, Messi said that all of us have the duty to score so whenever we get the chance, we shoot, no matter our position…” said Rojo.

“So when I saw that ball coming towards me, I kicked it in with all that I had in me and it went in!”

The win for Argentina has set up an intriguing second round tie with fellow pre-tournament favourites, France.