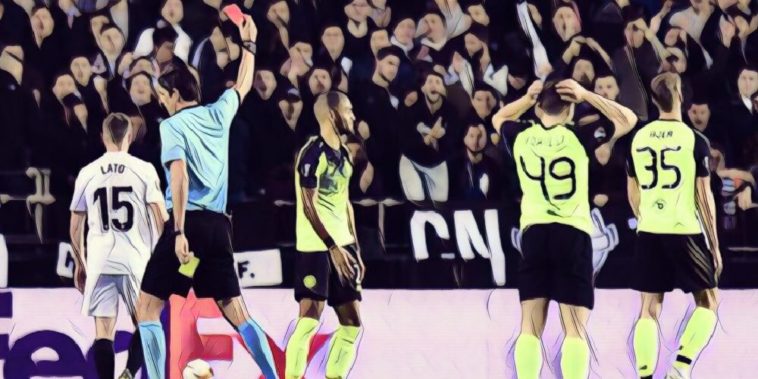 Brendan Rodgers has blamed the referee for his part in Celtic’s Europa League exit this evening but did say that his side was ‘excellent’.

Having been beaten 2-0 by Valencia at Parkhead last week, Celtic knew that they were always going to be up against it in the return leg in the Mestalla.

However, their hopes of progressing to the quarter-finals would be made all the more difficult when Jeremy Toljan was sent off for a second bookable offence eight minutes before the break.

The Spanish outfit took full advantage of the extra man with Kevin Gameiro scoring the only goal of the game in the 70th minute, just two minutes after being introduced to the action from the bench.

Speaking after the game, Celtic boss Brendan Rodgers said that the referee denied his side the opportunity of staging a comeback.

“Our shape worked really well for us and we started the game ever so well,” Rodgers told BT Sport.

“We carried a threat in our penetration and it looked like we would get the goal – and I think the referee took that away from us and that was disappointing.

“We had a chance to go 1-0 up through Kristoffer Ajer, but we lost a goal through a moment of slackness. Overall, though, I thought we were excellent.”