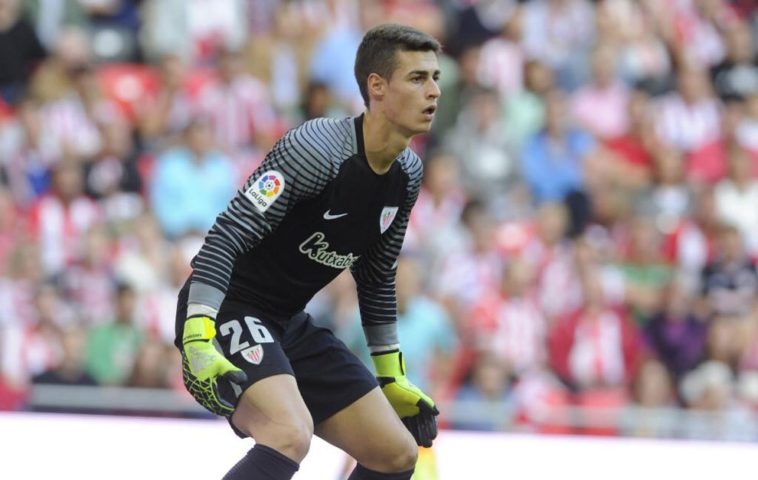 Manchester United have been handed a boost in their hopes of keeping David de Gea after reports in Spain suggest they have a new goalkeeping target.

Spanish publication Don Balon claim that Real Madrid are keen on signing Athletic Club de Bilbao goalkeeper Kepa Arrizabalaga, who is making a name for himself in La Liga.

The 22-year-old has made 27 appearances for the Basque club and has already been included in the Senior Spain squad for a World Cup qualifier against Israel and a friendly against France back in March when he was called up as a late replacement for the injured Pepe Reina.

Arrizabalaga is in the final year of his contract at the San Mames stadium, a contract which includes a €30m buyout clause. Athletic Club are notoriously tough negotiators, refusing to sell players for less than their release clause due to their policy of only playing Basque born players. They are desperately trying to tie down the rising star to a new deal, which would reportedly take his release clause to €50m.

According to the report, Real Madrid supremo Florentino Perez does not want Keylor Navas to be the club’s first choice ‘keeper, and has entered negotiatons with Arrizabalaga as he looks to come to an agreement to take him to the Bernabeu.

The news of Madrid’s interest in Arrizabalaga will be a huge boost to Manchester United fans, who will be hoping that Los Blancos have finally given up on signing their number one, and Spain international, David de Gea.

De Gea has long been linked with a return to the Spanish capital, with a move very close to being completed two summers ago. However after that deal collapsed at the very last minute, de Gea committed his future to United. Real were believed to be interested in signing him this summer, but were unwilling to pay the world record fee demanded by the Old Trafford hierarchy.