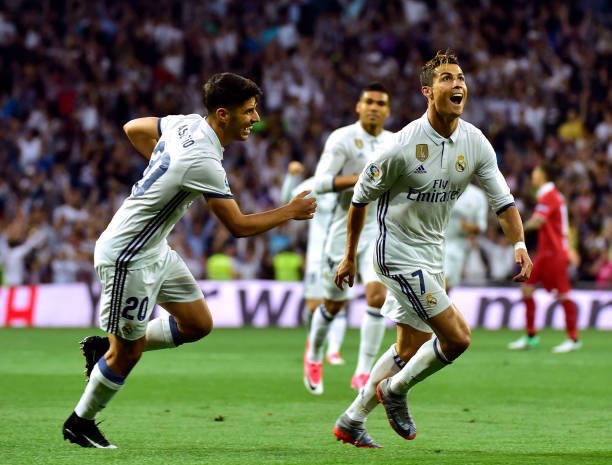 A brace from Cristiano Ronaldo moved Real Madrid closer to their first La Liga title in 5 years after a comfortable 4-1 victory over Sevilla.

The first goal was scored in rather peculiar fashion as Nacho stroked home a free kick despite neither the wall or goalkeeper being ready. Just as Sevilla were setting up their wall after conceding a free kick to Marco Asensio, Nacho came out of nowhere and placed the ball in the bottom corner. The goal stood despite protests from Sampaoli

The second goal was literally given away to Real, as Matias Kranevitter gave away possession to Los Blancos. Rodriguez found his shot saved and Ronaldo tapped it in to an open net.

A powerful shot at the 20th minute mark by Jovetic rattled the post, before having an amazing chip shot being denied by the crossbar.

Jovetic finally got his reward after scoring from a Vitolo lay-off early in the second half.

The 20 odd minutes after Sevilla’s goal were minutes of tension and uncertainty for both sets of fans. Sevilla didn’t look as fluent in attack as in the first half, which was probably their downfall.

Casemiro was brought on by Zidane to give Los Blancos a defensive edge. The move eventually paid off when Real started to threaten Sevilla again.

James Rodriguez waved the fans a long goodbye, seeming as if it is his last game at the Bernabeu.

The game was put to bed 12 minutes from time, as Ronaldo scored his 400th goal for Real Madrid. A ball in from Kroos was smashed home by Ronaldo on his ‘weak’ left-foot.

The German midfielder also got on the scoresheet as he scored a skillful tap in into the bottom right corner. Nacho was involved again, this time assisting a goal.

After Real Madrid’s win at the final game at the Bernabeu this season, they are all set to lift the title.

FC Barcelona’s last game is against Eibar, which should be relatively easy for them.

The La Liga is down to the wire, a loss for either Real or Barca will almost definitely end their chances of lifting the title this season.