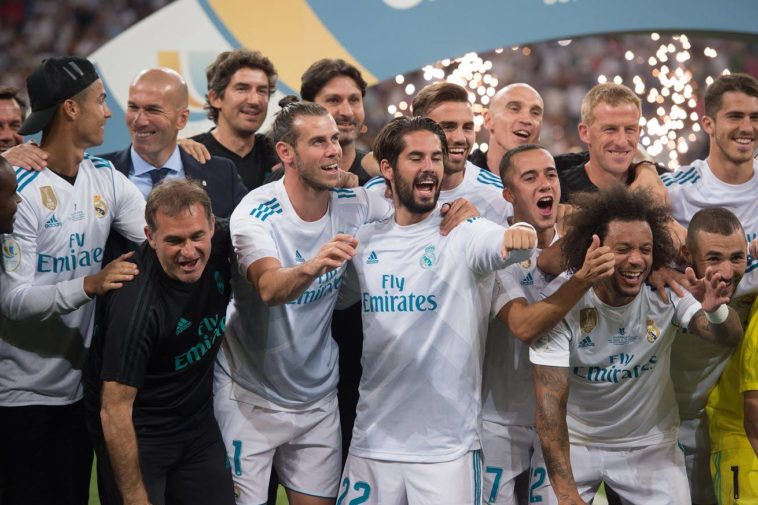 Real Madrid brushed aside arch rivals Barca in the second leg of the Spanish Super Cup, lifting their 7th trophy in 18 months. Here’s a look back at the game.

Despite big names like Isco, Bale, Casemiro and Ronaldo not starting, Los Blancos were toying with an almost spellbound Barcelona side. A stunning goal from starlet Marco Asensio and another from Karim Benzema in the first half put Real on their way to another title.

Marco Asensio, a fan favourite as of recent, started the game with a neat ball on to Luka Modric, just a minute on. Not too long after, the 21 year-old smashed home a shot from 35 yards, dipping past Marc Andre Ter Stegen, who was simply dumbfounded. Asensio scored a screamer in the first league too. Similar to one Marcus Rashford, Marco has scored on his league, cup and European debut. One of the most exciting talents in world football, the best is yet to come from Marco Asensio.

Many Cules had lost all hope of a victory after the first goal, but their worries go deeper than just the Spanish Super Cup. Lionel Messi was the only player challenging the Real squad, getting forward. Apart from him, the entire team looked sloppy, slow, and hopeless. Off the pitch, Barca fans want club President Bartomeu out, as the club has been in a decline since his appointment. All this with the news of Luis Suarez’s injured has Cules concerned about their club’s future.

Real doubled their advantage after Marcelo found Karim Benzema, who made no mistake in his finish, putting the tie and trophy to bed. After this it was Los Blancos basically playing around with their rivals. The Barcelona players were nutmegged, had the ball flicked over their head, and much more. All this with the constant cheers of the Madridistas in the Bernabeu.

Barcelona missed quite a few chances, some hit the post, some were saved, some were blocked. Amidst all this, there was a feeling of inner happiness in the fans, the coach and the players alike, for once, they were miles ahead of their rivals. Defender Gerard Pique admitted to feeling inferior to Real for the first time in his career.

Marco Asensio was subbed off 15 minutes from time, receiving a well-deserved standing ovation from the Bernabeu crowd. It looks as if Real have their new superstar in the man.