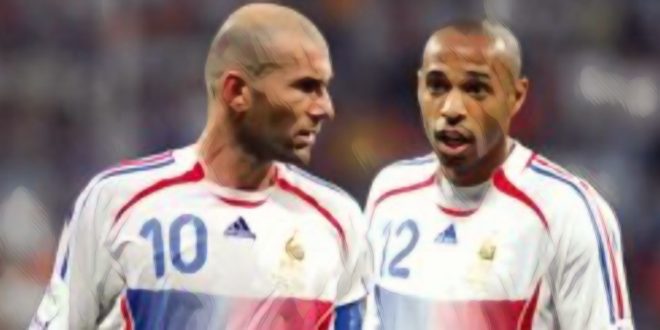 While Cristiano Ronaldo was busy banging in his 100th and 101st goals for Portugal, over in France both Olivier Giroud and Antoine Griezmann were also reaching their own international goalscoring milestones.

As Didier Deschamps side came from behind to earn a convincing 4-2 victory over Croatia, Chelsea forward Giroud took his French goal tally to an impressive 40 – just one behind the legendary Michel Platini.

Not to be out done, his long-haired strike partner also had cause to celebrate, the Barcelona striker matching Zinedine Zidane’s record of 31 goals to enter the list of Les Bleus top six goalscorers of all time.

But who else makes up that esteemed list we hear you cry? Well, let’s take a look…

Where to begin with this man?

The current Real Madrid boss was the ultimate footballer, possessing both unnatural brilliance on the ball and the type of footballing brain that very few seldom come close to. Zizou often saved his best performances for the biggest stages, with three of his 31 goals for Les Blues coming in World Cup finals, including a headed brace in the 1998 win over Brazil in Paris.

Unlike some other names on this list, there has never been any doubting his talent nor his idol status, with the former Juventus and Real Madrid midfielder the lynchpin of the remarkable French side that won the 2000 Euros alongside their 1998 World Cup success, with the mercurial Zidane putting in a series of performances throughout his international career that have gone down in footballing folklore.

#OnThisDay in 2006 France beat Brazil thanks to this masterclass from 34 year old Zinedine Zidane.

Here’s two minutes of a genius at work.

You never lose it, old son.pic.twitter.com/lhEM7wyvRk

While his international career may forever be remembered for his infamous headbutt in the 2006 World Cup final clash with Italy, it’s safe to say that neither France nor football, in general, will ever see a player of his ilk again.

In truth, it’s not exactly been a joyous season for the 29-year-old, having struggled for any sort of form after his high profile move to Barcelona last summer. The former Real Sociedad forward toyed with the idea of leaving his former club Atletico Madrid for a number of years, and it would appear karma has come out in full force with the player now relegated to either the bench or the left flank at the Nou Camp.

That being said, there’s no denying that his France career thus far has been anything but glorious, the striker finishing as the top scorer at Euro 2016, before scoring a further four goals in 2018 as Deschamps men lifted the World Cup.

The arrival of Mbappe has somewhat stolen the main man mantle away from Griezmann, yet he’ll certainly remain in a key figure in the years to come.

In an era dominated by the likes of Zidane and Thierry Henry, potent finisher David Trezeguet has perhaps not garnered the level of recognition that he deserves.

A lethal frontman at both Monaco and Juventus, Trezeguet transferred his goalscoring talents to the international stage with ease, forming a devastating partnership with Thierry Henry as France conquered all before them.

The Euro 2000 tournament, in particular, saw the best of the Frenchman, as he scored the vital golden goal winner in the final, giving France a 2-1 victory over Italy. Trezeguet would go on to represent his country for a further eight years, before bowing out of international football in 2008 as one of France’s greatest ever marksmen.

David Trezeguet with the winner in the 105th minute in final of Euro 2000… pic.twitter.com/rlBuOiPbxx

The suave striker has been the unsung hero of the French national team in the last decade, delivering goals of both beauty and importance, while also dovetailing effectively with perhaps more mobile and pacey forwards.

With Karim Benzema exiled from the side, Giroud has became his nation’s go-to centre forward, playing an integral yet reserved role as France romped to World Cup victory in Russia two years ago.

He may not have scored in that tournament, but he’s certainly delivered the goods enough times over the years. Both a scorer of great goals and a delightful poacher, Giroud has one of the most wonderful goal compilations out there – just take a look at his 2017 volley against Sweden.

At 34 he may be fast approaching the end of his international career, yet there’s still time to add a European Championship winners medal to his already impressive trophy collection next summer.

France legend Platini may have marred his public image in recent years for his dealings with a certain Sepp Blatter, yet on the pitch he was about as good as they come.

A winner of three successive Ballon d’Or trophies in the mid 1980s, Platini was also the key man as France lifted the 1984 European Championship title – a tournament which saw the former Juventus man finish as top scorer and as player of the tournament.

Arguably one of football’s greatest ever talents, the midfielder is an iconic figure in French football history and – despite his recent controversies – deserves continued recognition for his playing quality.

Atop the pile is, of course, the one and only Thierry Henry.

The former Arsenal forward is unsurprisingly in first place having replicated his remarkable club form at international level, notching 51 goals over a glorious 13-year period – cementing his place as one of his nation’s most loved stars.

Henry’s France career began back in 1997, with the forward quickly impressing to earn a place in the squad for the 1998 World Cup – a tournament that would see him finish as his nation’s top scorer with three goals. He would go on to score a further three goals two years later as his nation tasted further success.

Like many of the talents above, mere stats and goal records do not do the man justice. Just watching the Frenchman racing through on goal before delivering a cool and composed finish was enough to make you fall in love with football – and at times even question your loyalty to your own club.