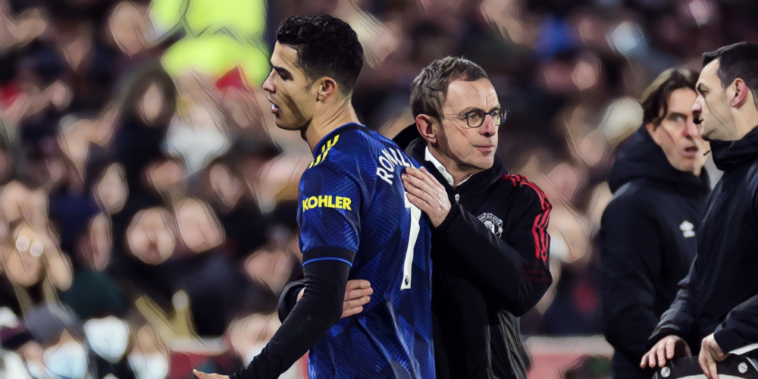 Ralf Rangnick is keen not to make a ‘fuss’ over Cristiano Ronaldo’s substitution in midweek, following the forward’s reaction to his withdrawal at Brentford.

Ronaldo demonstrated his disappointment after being substituted in the 3-1 win over the Bees, with the Portugal captain later seen in discussion with Rangnick regarding the change.

Ronaldo’s reaction became the dominant talking point post-match, but Rangnick is keen to move and says a ‘fuss’ should not be made. He insisted that his changes are always in the ‘best interests of the team’, but says he has no ‘problem’ with Ronaldo’s ’emotional’ response.

“We shouldn’t make too much of a fuss out of it. I explained it to him during the game,” Rangnick said at his pre-match press conference ahead of United’s clash with West Ham this weekend.

“I said the job of a football manager is to help teams win games. We did it better. The only question was who do we take off. He said why me, why not take off one of the younger players.

“Football is about taking a decision in the right moment. Second goal, one of the most attacking situations in the game. He hasn’t been substituted for the first time in his career. A player like Cristiano Ronaldo doesn’t like to be substituted.

“The reaction was emotional. That is not a problem. I know how offensive players react to this but it is about getting points. Every game of great importance. The team is more important no matter who it is. Bruno [Fernandes] was also substituted and wasn’t happy. But it is what is in best interests of the team and the club.”